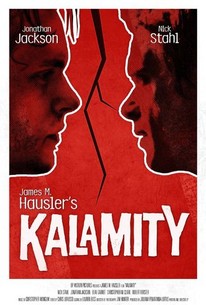 Haunted by memories of his ex-girlfriend Alice (Beau Garrett), a heartbroken Billy (Nick Stahl) returns home to Northern Virginia seeking solace from old friends. But what he finds there is more disconcerting than comforting: his best friend Stanley (Jonathan Jackson) has become unstable, mysterious, and withdrawn from those around him. Billy teams up with another old friend, Stanley's roommate Christian (Christopher M. Clark), to find out what's going on, and as they probe Stanley's recent activities, their friend's behavior seems more and more bizarre and frightening. The discovery of blood-stained evidence among Stanley's possessions pulls them deeper into their friend's nightmare-and eventually leads to a violent confrontation that not everyone will survive.-- (C) Official Site

More skillfully directed than written, "Kalamity'' is competent yet never startling, either artistically or viscerally.

Stahl should have had a career similar to Sam Rockwell's, blending thoughtful indies with fun popcorn flicks. Instead, he's spinning his wheels in junk like this.

There isn't enough plot in this amateurish mope-athon to fill up a half-hour TV show.

For all its seriousness, Kalamity lacks a steady narrative drive.

Writer-director James M. Hausler seems convinced that deep emotional truths will seep from the screen if he keeps downshifting the pace to an arty crawl and holding his actors in a vise grip.

With an overdone score, horrendous script, choppy editing, and bizarre tone changes, Kalamity is just weird in that B-movie, straight-to-video way that sometimes distinguishes films into the so-bad-it's-good genre but not quite here.

A talented cast can't save this low-budget psychodrama about male malaise from its meandering screenplay.

A lackadaisical albeit stylishly directed thriller deficient in suspense, imagination and genuine poignancy.

There are no featured audience reviews yet. Click the link below to see what others say about Kalamity!