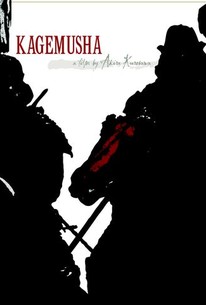 In this film, filmmaker Akira Kurosawa spins the tale of a mighty Samurai warrior whose services are so much in demand that he's forced to dispatch doubles of himself. When the warrior dies, petty thief Kagemusha is spared from execution if he agrees to take over for his dead master.

"Kagemusha" is such a gratifying come-back picture for a justifiably revered filmmaker that one feels churlish harboring certain reservations.

The film he finally made is simple, bold, and colorful on the surface, but very thoughtful. Kurosawa seems to be saying that great human endeavors (in this case, samurai wars) depend entirely on large numbers of men sharing the same fantasies or beliefs.

There is beauty in Kagemusha but it is impersonal, distant and ghostly. The old master has never been more rigorous.

Beyond the exquisite visual effects and battles, what is most interesting about the story is its protagonist: a double who turns into the shadow of the warrior Kagemusha. [Full Review in Spanish]

The film swings like a pendulum between stillness and action, an occasionally jarring mix of David Lean-like panoramas with intimate character study.

Kagemusha, much like the similarly overblown but handsomely mounted Lawrence of Arabia, is an epic with a cipher in its point position.

A fine example of the Kurosawa style...precision of narrative in both scripting and imagistic storytelling... [Blu-ray]

Though not as overall impressive as his next picture Ran, Kagemusha, Akira Kurosawa's return to the epic Samurai film deservedly received Oscar nominations for its great pictorial beauty and other production values.

Here, as in all of Kurosawa's late films, this sense of hopeless fixity renders unconvincing any hope for human agency.

Nakadai's performance as Kagemusha and Shingen is impressive, creating two distinct characters, one of whom eerily mimics the other

Dull and plodding presentation of an interesting period of Japanese history.

Towards the end of his career, Kurosawa began having difficulty securing funding for his increasingly ambitious projects, which led to gaps of several years between them. He ended up getting this particular film made almost entirely because of support from the likes of George Lucas and Francis Ford Coppola. And, in an ironic twist, as his eyesight began to fail him, Kurosawa's films began to increase in their visual splendor. Set in the 16th Century, this is an epic film centered on a quest for control of Japan between three warlords. The film primarily focuses on one in particular. As he nears death, Shingen Takeda employs the services of a petty thief who looks nearly identical to him to be his double. When Takeda does eventually die, the simple ruse turns into a monumental task for the titular Kagemusha (double/shadow warrior). Unlike some of his other films, this one is less concerned with sweeping battle scenes, and is primarily an intimate character study focusing on themes of identity, what it means to fill a role, etc. It's not as heavy as you might think, but it is definitely very poetic. I liked this, but I didn't get quite as into it as I could have. For one, I didn't have the option to watch this with the commentary (or at least the first 20 minutes), which I had read clears up come early confusion about what is going on, who is who, and contextualizes it all. That could have helped, though I managed to get the gist of it anyway. Also, I unfortunately only got to see the original western release version, which is 20 minutes shorter than the original release, which is also the same as the Criterion cut. Had I gotten to see the longer cut, I think I really could have been swept up in this epic, yet intimate artwork. Despite my gripes, the film is indeed gorgeous to look at. It's what you'd expect from AK, but it still bears repeating how wonderful the cinematography is. The period details are likewise top notch, and can be greatly appreciated, even if one isn't familiar with the historical time period and context the film is set within. In the crucial double role of man and impersonator, Tatsuya Nakadai is quite solid, given a rather subdued, but still gripping turn as a man and, especially, his double. Everyone else is okay, but, seem to be there merely as a backdrop for what is almost totally carried by one actor. The film is long, and admittedly a tad draggy and boring here and there, but overall, it's quite a spectacle. Oddly enough, the battle scenes are mostly off screen and the bulk of what's shown is the aftermath. It's still well done though. Whether you're a die hard or a newbie, you should give this one a look.

Another magical story bring by Kurosawa.

After a tribal leader is killed, his advisers use a double to masquerade as their dead leader. Akira Kurosawa, a master story-teller and a filmmaker whose stylistic flair is almost unmatched, brings a story that is simply unworthy of his talents. It is essentially a Japanese version of Dave (or more accurately stated, Dave is an American version of Kagemusha), and it is only Kurosawa's beautifully framed shots, engaging action choreography, and eye for character detail that keeps this film from descending into the obscure and banal wastefulness that plagues its latter-day American counterpart. Yes, I understand that Dave was meant as a cheeky comedy and Kagemusha is supposed to be profound, but I fail to see the profundity. Overall, this film is lesser Kurosawa, still engaging but far from the greatness of The Seven Samurai and Rashomon.

Kagemusha is a simple, slow-moving, but altogether fascinating look at honor and loyalty. When a powerful warlord is killed in battle, a thief with an uncanny resemblance is reluctantly made to impersonate the recently deceased in order to keep up appearances. Aside from being an interesting piece of history, Kurosawa is also playing with the idea of honor. Kurosawa gives the viewer large scale battle sequences in which many thousands of men are willing to die for their allegiance to their honored leader. Yet, how honorable and infinite is the master's wisdom if it can be mimicked by a common thief? And for this man unwillingly thrust into such a position of power, Kurosawa makes a point to show the horror on his face as he sees hoards of young men being brutalized under his command. After the imposter is outed, Kurosawa shifts from the leader's perspective to the soldiers themselves. Showing how without an idea to cling to, they really are just dying for nothing. The camera just rests on the battlefield, watching as the bloodied and battered soldiers fight to live. It is a difficult scene to watch, but through it Kurosawa makes some powerful statements. It is a samurai epic that dares to question the meaning of it all, and for that alone is deserving of your attention.