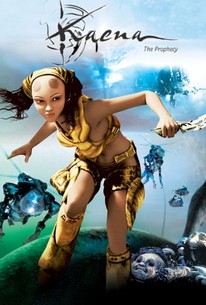 Critics Consensus: Though Kaena: The Prophecy is visually inventive, its story is incoherent, derivative, and dull.

Critics Consensus: Though Kaena: The Prophecy is visually inventive, its story is incoherent, derivative, and dull.

Critic Consensus: Though Kaena: The Prophecy is visually inventive, its story is incoherent, derivative, and dull.

Billed as the first European 3-D CGI feature-length film, Kaena: The Prophecy revolves around a mammoth tree that rises 100 miles from the planet's surface and provides shelter and sustenance for a variety of different races and species. Referred to as Axis, the tree has been losing its sap at a rate alarming enough to threaten the well-being of some of its inhabitants. Determined to get to the root of the disappearing sap is Kaena (Kirsten Dunst), a rambunctious teenager who leaves her village against the wishes of its elders. She encounters the mysterious Selenites along the way; led by an insidious queen (Anjelica Huston), the Selenites have resorted to enslaving another race in order to prevent the tree's decline into death. Directed by Pascal Pinon and Chris Delaporte, Kaena: The Prophecy began filming in 1999 on a budget of 26 million dollars, and has been described as having merged elements from Shrek and Final Fantasy.

Anjelica Huston
as Queen of the Selenites

News & Interviews for Kaena: The Prophecy

View All Kaena: The Prophecy News

Critic Reviews for Kaena: The Prophecy

The monsters are derivative, the attempts at humor are mostly feeble and the story, in the end, lacks a certain je ne sais quoi.

Derivative and aimless filmmaking by directors and 'writers' who know only how to craft eye candy.

Simplistic writing and one-dimensional characters do in this animation film.

There are moments in Kaena that are absorbing, but too much of the time it simply becomes tedious.

Augurs well for dazzling visual work but struggles mightily on the storytelling front.

It's a valiant effort, if not quite successful.

A pretty terrible movie with a nonsensical plot...

Has a more genuine SF premise behind it than most of today's so-called sci-fi offerings . . .

An animated film without a hint of anima.

E-Mail This Article to a Friend KAENA: THE PROPHECY Words of wisdom: "You don't need wings to be free! There's another world with a blue sun and so much sap you can swim in it!" Maybe it sounds better in the French version.

The animation in Kaena is so ham-fisted that it distracts even from the fairly tedious story.

Audience Reviews for Kaena: The Prophecy

The film was disjointed. I really wanted to like it, but it just felt flat.

I found this a better-than-average science-fiction cartoon. Kaena figures out why her world is dying. You need to watch this movie twice to figure out which race is which, and how they are all intertwined.

Titan A.E meets Final Fantasy. While the characters and their gestures and facial features aren't always convincing, the backgrounds and ideas for the world this computer animated movie takes place in are really breathtaking at times. Unfortunately the story isn't very original either. But not bad.