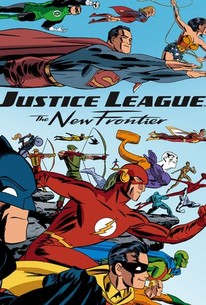 Adapted from the six-issue comic book series originally published in 2004, the animated adventure Justice League: The New Frontier follows the epic adventures of Superman and his fellow DC Comics superheroes from the end of World War II to the global tensions of the Cold War. In addition to detailing the ultimate fate of DC war comic squadron The Losers and showing how reluctant fighter pilot Hal Jordan made the stunning transformation into The Green Lantern, the film also follows Superman and Wonder Woman as they struggle with their involvement on the East Asia battle arena, finds the Martian Manhunter arriving on planet Earth, and showcases John Henry's valiant struggle against the evil Ku Klux Klan.

Keith David
as The Centre

Robin Atkin Downes
as The Guardian

The central problem with "Justice League: The New Frontier" is that Bruce Timm's clear, square-jawed animation style doesn't match the tone... Director Bullock, rather than using his film's style as a necessary distancing tool, merely revels in it.

a joy for an old-school comic book fan, and hopefully a view of some awesome things to come.

Much more of a sophisticated outing this time around, and while it may go over the heads of younger audiences, there's a lot to be gained for older folks looking for more than one-liners and knockdown drag out tussles between titans...

The first 45 minutes is fantastic. Pity about the rest . . .

How the JLA came together in a nutshell. A small nutshell. While it's good that the focus goes broader than simply Batman and Superman for a change the justice done the other frontrunners in the DC universe is not really justice. The work has a curious retro look going for it that's not offputting and the actors (quite a few names!) and music do well. If only it had been better written.

Good animated movie. I love all the superheros involved especially the Flash one of my favorites all-time. I like how they did not concentrate in one character only and divided there attention into all throughout the movie. Adapting the award-winning DC Comics miniseries DC: THE NEW FRONTIER by Darwyn Cooke, Justice League: The New Frontier spins a tale of the DC Universe in the 1950s, focusing on test pilot Hal Jordan (Green Lantern) and the Martian Manhunter. The story also features other DC characters, including Barry Allen (the Flash), Superman, Wonder Woman, Batman, and many more.

29/05/2010 (DVD) Its the New "Justice League" in the 1950's! Its fun watching most of the popular "Super Heroes" in one flick but what I enjoyed most was the story telling. This version was awesome! Its darker and more sinister. I also got a glimpse of some of the other "Justice League" members who were gradually taken out of the group during the comics. The animation is fantastic and from the credits I noticed a lot of Asian names, most likely Japanese and Korean I believe who mostly dealt with the art and animation department. I hope they do more like/of this!

I didn't read the graphic novel off of which The New Frontier was based (at least not the first time I saw it) but I'm guessing there was a lot more to it and this movie is more or less a Cliff Notes edition. I loved the 50s setting with the red paranoia and the whole scapegoating aspect of the story's opening was really impressive. The ending kind of flaked out in the same way anime movies flake out but the very ending tied together pretty nicely. Nowhere nearly enough Batman and Green Lantern (as in NOT Hal Jordan) but overall not bad. I liked it a lot more the second time around and it got much more of an emotional reaction out of me. I don't know if I was having a particularly Summer's Eve kind of day, if the movie's message spoke louder this time or what. But the stretch of the movie where it looked like Superman bought it had me a tad misty. Justice League: New Frontier is proof positive that their animated features beat the hell out of Marvel's. Great voice performances and an overall great job.