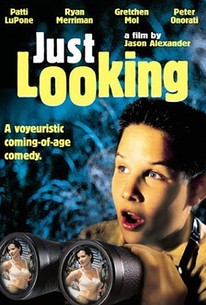 A wacky screwball sex comedy for the kids and grandpa too? Seinfeld's Jason Alexander makes his directorial debut with this gentle but funny coming-of-age story set in 1955 about Lenny (Ryan Merriman), a 14-year-old from the Bronx who is dedicated to witnessing a copulating couple. His early attempts at spying on his mom and her new corpulent husband Polinsky are thwarted when he is sent to live with his aunt Norma and uncle Phil in Queens for the summer. He soon learns that Norma is pregnant. No sex. All looks lost until he meets Hedy (Gretchen Mol), a fetching though lovelorn night nurse. Lenny also befriends the equally randy John, who informs him that he has started a sex club with a couple of neighborhood gals. Though the club is all talk, they all discuss the mechanics of coital engagement with language that is equal parts gutter and sex-ed. Meanwhile, as Lenny spies on Hedy, he inadvertently befriends her. Together they muse about the complexities of love and wistfully remember their respective dead fathers. Just Looking is a sweet-minded film about the great mystery of the teenaged years.

The timing's off on almost every scene, giving you too much time to accurately predict what'll occur next.

The sets, the cars, the costumes, everything about the production is authentically nostalgic.

The rare and wonderful thing about this film...is that it so vividly recreates the sensibilities prevelant during the era it recalls, the mid-1950s.

A 14 year old's quest to find out all he can about sex actually opens up some doors for him about the meaning of friendship, love, and masculinity.