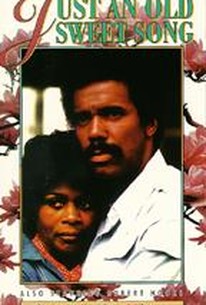 Originally telecast September 14, 1976, as a CBS "General Electric Theater" special, Just an Old Sweet Song was the first of three pilots for Down Home, a proposed TV series created by filmmaker Melvin Van Peebles. Robert Hooks and Cicely Tyson star as Nate and Priscilla Simmons, the patriarch and matriarch of a middle-class Detroit family. Upon learning that their grandmother (Beah Richards) is not long for this world, Nate and Priscilla pack up their kids and head down South. Eventually, the family rediscovers its African-American roots and elects to stay in their new rural surroundings. Robert Hooks' real-life sons (Kevin and Eric Hooks) appear as his screen sons, Junior and Highpockets. Just an Old Sweet Song was followed by two 60-minute sequels in 1978: Kinfolks (in which Madge Sinclair replaced Cicely Tyson as Priscilla Simmons) and Down Home. Alas, none of the three films yielded a weekly series.

Kevin Hooks
as Junior
View All

There are no critic reviews yet for Just an Old Sweet Song. Keep checking Rotten Tomatoes for updates!

There are no featured reviews for Just an Old Sweet Song at this time.