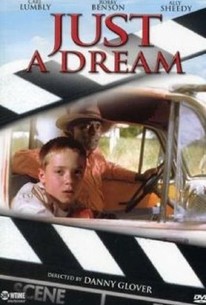 A wide-eyed young boy finds his small-town life turned upside down in the feature directorial debut from actor Danny Glover. Jeremy Sumpter of Frailty stars as Henry, a youngster in rural America who dreams of Hollywood when a big-studio movie crew comes to town to shoot a new picture. Also starring Carl Lumbly and Robby Benson, Just a Dream had its premiere at the 2002 South By Southwest Film Festival.

Critic Reviews for Just a Dream

There are no critic reviews yet for Just a Dream. Keep checking Rotten Tomatoes for updates!

Audience Reviews for Just a Dream

There are no featured audience reviews yet. Click the link below to see what others say about Just a Dream!