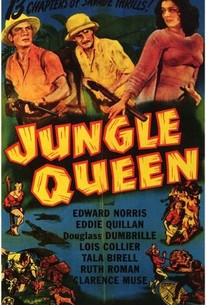 Veteran action specialists Ray Taylor and Lewis D. Collins co-directed this below-average Universal serial featuring brunette starlet Lois Collier as a young woman swept up in international intrigue in Darkest Africa. Although the serial's nominal (and much imperiled) heroine, Collier did not play the title role, however. That dubious distinction went to a very young Ruth Roman, in her screen debut, as an ethereal jungle girl whose presence in the film remained vague throughout. The muddled story is something about the Nazi High Command (personified by that notorious blackheart Douglass Dumbrille) attempting to infiltrate and sway an unfriendly jungle tribe. Considering the real-world situation in 1945, The Jungle Queen was frivolous entertainment at its mind-numbing worst.

Napoleon Simpson
as Maati
View All

There are no critic reviews yet for Jungle Queen. Keep checking Rotten Tomatoes for updates!

There are no featured reviews for Jungle Queen at this time.