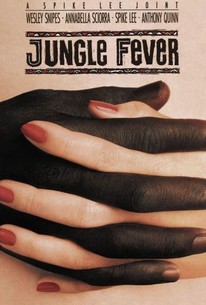 The romance between black architect Flipper Purify (Wesley Snipes) and his white office temp Angie Tucci (Annabella Sciorra) is the subject of director Spike Lee's Jungle Fever, a statement on interracial love and its effects on the society at large.

Randolph May
as Man in Crack Den

El-Shah Muhammad
as Gentleman in Wheelchair

Bob Adrian
as Man on the Street

However diffuse the movie's agenda, it is never less than thoroughly involving.

It's all too much for Lee to handle. Jungle Fever is overlong, yet he hasn't found the screen time to give each of these people his or her reasons, and even the Snipes and Sciorra characters slip away from him.

It certainly is something to see.

Isn't it refreshing to talk about a thoughtful movie in a summer full of fluff?

Jungle Fever may be a failure, but it is the kind of failure that engenders hope: It finds Lee refining the skills he already possesses and striking out in encouraging new directions.

The ingrained self-hatred of its characters reflect outward toward those who remind them of themselves.

In that sense, Lee is a victim of his own high standard.

Jungle Fever is so many graceful things, so many angry things, so many truly moving things that its occasional faults are the faults of excess passion, not failure of imagination.

You'll remember Sciorra and Snipes but wish you had learned more about them -- and the society that complicates their lives so cruelly.

Lee's direction is wonderfully fluid and, as in most of his movies, he is superbly served by the striking cinematography of Ernest Dickerson and strong lead performances. However, there is a glibness to his script.

What we have here is Spike Lee's thematic sequel to Do The Right Thing. While ultimately an exploration of inner city life for different cultural, economic, and racial groups, the main focus is on the consequences, repercussions, and attitudes towards interracial relationships. The film has noble ambitions and aims, but a lot of the strength is undermined primarily by some surprisingly untimely music cues from Stevie Wonder and a really bloated, meandering run time. I liked how the film explored the issue of mixed dating from different viewpoints, but I found it odd how it neglects to really capture the situation from the perspective of the two main parties: a well to do black architect, and his working class Italian secretary. Aside from mixed dating, the film does take a more general look at big city life, with special attention paid to crack addiction. The film is extremely well shot, with some well used camera moves (including a ripping long take), and, despite being flawed, does offer a great amount of substance and food for thought. It also contains some terrific performances from a notable ensemble cast, which includes names like Wesley Snipes, Anna Sciorra, Anthony Quinn, Spike Lee, Ossie Davis, Ruby Dee, John Turturro, and briefer appearances from Brad Dourif, Tim Robbins, Queen Latifah, Halle Berry (this being the debut for those latter two), as well as a breakout turn from Samuel L. Jackson as the crackhead Gator. All in all, the film is kind of a mess, but it does have its moments, so yeah, give it a go.

For some reason I don't seem to ever watch a Spike Lee film in one sitting. The only ones I did were Do the Right Thing and Clockers. I did two sittings for this one, it's not a bad thing, but I just feel a lack of concentration when he does extended intimate portraits on his characters. Anyways, this 'joint' didn't feel like it dragged on, nor did it feel too short but I felt by the end of it that the central theme was slightly forgotten about. I think that's because all the supporting characters (especially Samuel L Jackson) are just so much more interesting than the central two.

This was made before I started sighing during Spike Lee movies. I thought the performances here were fabulous.

I'll admit to not realising racism was still so prominent in the 90's, but I didn't grow up in New York. Anyway, Snipes cheats on his wife with a white woman (technically she's Italian, there aren't actually any "white" people in this film), and the rest of the film is simply an exploration of peoples attitudes towards mixed-dating. And it all goes over the top: instead of simply accepting that Snipes cheated because he felt an attraction, his wife reckons he cheated because of some hereditary nonsense. The camerawork is excellent as are Samuel L Jackson and John Turturro. The score is fucking terrible - I know Stevie Wonder is a talented musician but something went wrong. If they'd managed to chuck in a plot somewhere this could be really good. As it is, I spent most of the film recalling that bit in MP's Holy Grail where everyone shouts "Get on with it!"