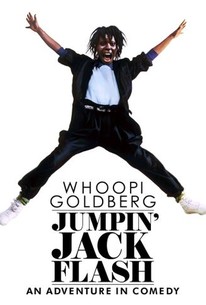 This was the first full-length feature film directed by Penny Marshall (of Laverne and Shirley TV fame), and may not be one of her most successful but it has its moments. Whoopi Goldberg is Terry Doolittle, an office worker with her share of eccentric colleagues and now an added problem: some spy has tapped into her computer and is asking her for help. Terry decides the only womanly thing to do is to get in there and save the man and so she heads into a whole series of unlikely situations. Run-ins with an odd repairman (Jim Belushi), an invalid diplomat, and a KGB mole have her impersonating people like Diana Ross and generally wreaking havoc on the whole spy game. Though once again, Whoopi has seen better material for her talents.

Carl Labove
as Earl The Guard

Anthony Hamilton
as Man in Restaurant

Heide Lund
as Woman in Restaurant

George Jenesky
as Man with Umbrella

Whoopi Goldberg is the only original or interesting thing about Jumpin' Jack Flash. And she tries, but she's not enough.

It took four screen writers (let's leave them, with mercy, anonymous) to come up with a story that has no real character conflict, and director Penny Marshall, in her debut, doesn't help them any.

...works as neither a comedy nor a spy caper.

Goldberg and director Penny Marshall... have managed to inject a female sensibility into the film, cramming it full of fun, insightful details.

Appealing in spite of itself.

A Hitchcock plot, that is very good. But the screenplay don't help. Too silly to be good.

Whoopi!! Not really that funny. She needs eyebrows.

A fun spy comedy, with a typical 80?s feel to it. Whoopi Goldberg is her usual overtalking fun self and the film makes for easy watching.

I figure if I saw a film and the only thing I remember about it was that I saw it, I couldn't have been very impressed.