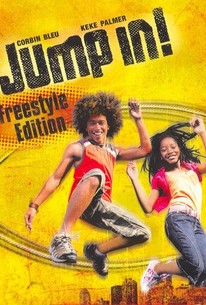 A Brooklyn teen decides to trade in his boxing gloves for a jump rope after discovering that he has a special knack for the Double Dutch. Izzy (Corbin Bleu) is a teenager who spends most of his days perfecting his hook at the local gym. When Izzy discovers that skipping rope on the sidewalk is as much fun as sparring in the ring, he soon decides to take his fancy footwork into a whole new arena. Making the transition from a solo sport to a team sport isn't easy though, and now in order to prove that he can keep up with the best Izzy will be forced to hold his own against a talented team member (Keke Palmer) whose feet move as fast as the former boxer's fists.

Gene A. Mack
as Felix
View All

Critic Reviews for Jump In!

For all its predictability, it's efficiently and often energetically directed by Paul Hoen, working from a script by Doreen Spicer, Regina Hicks and Karin Gist.

Disney ropes in an energetic winner for families.

The 8 to 18-year old audience for whom this urban melodrama is intended won't be put off by the youthful cast's limited acting range, phony boxing choreography and the wavery storyline.

You've gotta hand it to the Disney Channel. They sure know how to inspire their audience.

...quickly sinks underneath the weight of its heavy-handed, predictable, and flat-out ridiculous storyline.

It's movies like Jump In! that make me appreciate Dodgeball all the more.

This latest DCOM hit is a puddle of boring clichés and too-familiar situations.

Audience Reviews for Jump In!

Cheesy film but I loved it. Corbin Bleu was really good and I liked the fact that the film was about something that hadn't really been made into a film before. The skipping scenes were really interesting and exciting. It wasn't that bad of a film.

Cute movie that my girls enjoyed a lot.

goofy and dumb. why did i watch this