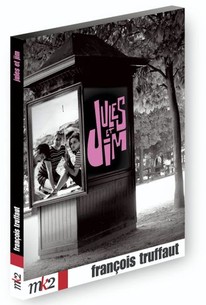 Critics Consensus: Francois Truffaut's arguable masterpiece in a filmography full of masterpieces ready to be argued for, Jules and Jim is an eternal ode to boundless love.

Critics Consensus: Francois Truffaut's arguable masterpiece in a filmography full of masterpieces ready to be argued for, Jules and Jim is an eternal ode to boundless love.

Critic Consensus: Francois Truffaut's arguable masterpiece in a filmography full of masterpieces ready to be argued for, Jules and Jim is an eternal ode to boundless love.

Acclaimed French director François Truffaut's third and, for many viewers, best film is an adaptation of a semi-autobiographical novel by Henri-Pierre Roché. Set between 1912 and 1933, it stars Oskar Werner as the German Jules and Henri Serre as the Frenchman Jim, kindred spirits who, while on holiday in Greece, fall in love with the smile on the face of a sculpture. Back in Paris, the smile comes to life in the person of Catherine (Jeanne Moreau); the three individuals become constant companions, determined to live their lives to the fullest despite the world war around them. When Jules declares his love for Catherine, Jim agrees to let Jules pursue her, despite his own similar feelings; Jules and Catherine marry and have a child (Sabine Haudepin), but Catherine still loves Jim as well. An influential film that has grown in stature over the decades, Jules et Jim was often viewed by the counterculture of the 1960s as a cinematic proponent of the free-love movement, but in actuality the picture is a statement against such a way of life. Despite the bond shared by Jules, Jim, and Catherine, their ménage à trois is doomed to fail; and Catherine's inability to choose between the two men leads to tragic consequences for all three.

Christian A. Wagner
as Helga

Pierre Fabre
as Drunkard in Cafe

Michel Subor
as the Narrator
View All

News & Interviews for Jules and Jim

View All Jules and Jim News

Critic Reviews for Jules and Jim

With this 1961 film Truffaut comes closest to the spirit and sublimity of his mentor, Jean Renoir, and the result is a masterpiece of the New Wave.

Truffaut's third film may not look the masterpiece it seemed 40-odd years ago, but it remains one of his most enjoyable movies.

There is joy in the filmmaking that feels fresh today and felt audacious at the time.

To put it quickly and crisply, it is charming, exciting and sad.

A painfully moving story about uncompromising friendship and uncontrollable love.

Jules and Jim continues to be a remarkable film and one of the best by François Truffaut. [Full Review in Spanish]

It turns out that the "gloriously independent" Catherine is really little more than Truffaut's idea of a captivating-but-ultimately-evil femininity.

I was constantly being buffeted, shocked, puzzled, and put off by what seemed to me perverse changes of the emotional mood.

What I chiefly remember about this film is its images of delight, its occasional sense of piercing, incredible happiness, a radiance that overlays all.

A work of decadent high romance-a tour de force carrying hints of terror beneath its gay, melancholy and noble surface.

...playfulness is the defining characteristic, even if what it largely entails is a tragic gender gap of fatal proportions.

Audience Reviews for Jules and Jim

A breath of fresh air for its time, Jules and Jim now remains an admirably-constructed and well-acted, but far too repetitive love triangle movie.

I liked this movie, and I enjoyed watching it, but I was left expecting more. As part of the French New Wave, I knew to expect this film to be overflowing with style and technique, but I also expected it to be fun. Maybe I shouldn't have been so insistant on that last part. This film is fun, at times, but it gets serious too, and when it does, I find it harder to swallow. Maybe because it's hard to completely identify with or care deeply about the characters. This story is all about an Austrian named Jules who is friends with a French guy named Jim. They share a mutual love for a (probably bi polar) woman named Catherine. The story takes place over a coupkel of decades from the 1910s to the 1930s, and hops all over Europe (mostly France and Germany). I don't mind love triancgle movie, but the way the story progresses seemed very odd and all over the place and unlkely. Also, this is a period piece, but I never really got that sense. It seemed more like the time it was released than the time it was supposed to be portraying. Because this film is style over substance, and because the characters are nuts, ridiculous, and hard to identify with ocmpletely, I should, by all rights, knock this down a notch or two. However, the film has a gorgeous look, great camera work, wonderful music, good performances, and the aforementioned style, so there. I do recommend this movie, despite it being overrated. Part of its importance and legacy and undeniable and understandable, but this film is a bit of a mess. It's not always apparent though since often this film is light, breezy, and not restricted by a super dense plot. See it, but don't expect it to be the masterpiece that many claim it to be.

Frenetic, fresh, and still fun to watch even as it approaches it's fiftieth birthday. While certainly the most stylish of the New Wave films that I have seen so far, the frequent use of freeze frames, jump cuts, and panning shots, surprisingly isn't distracting. In fact, Trauffaut's use of these devices is very judicious and really elevates the film as a whole. This sets the work apart from films such as Goddard's Breathless where it seemed at times that many of the devices used in the film were used because they were "cool" or different, rather than augment the power of the story. It is a dynamic rumination on friendship, love, war, and the changing nature of femininity, and certainly one not to be missed.

I'm not sure where to start about Jules et Jim... It's a film about friendship, love, and the passing of time.

Jules and Jim have the type of friendship anyone dreams of; understanding, unconditional, exciting, stimulating. They share many things, even some women. One day, however, Jules meets Catherine, a French girl, and her "serene smile" and freewheeling personality immediately captivate him. Jules tells Jim that he is really interested in her, so Jim does not try anything. Having set the limits, Catherine, Jules, and Jim become a close-knit group. The three of them go on holiday together. There's a complicity to everything they do, along with spiritual curiosity and sexual tension. Catherine seems to be a liberated, poetic, "real" woman and Jim can't help falling in love with her in silence. Jules marries her. After their marriage, Jim reenters the picture.

I found the characters well-written and very well acted. Jeanne Moreau's face is one of the most expressive I have ever seen. In the same way, Oskar Werner and Henri Serre deliver great lines and give the film some truly powerful moments of insight. Also, much of the film regards the passing of time. In fact, at moments it passes very quickly, at others, a week seems a century. Truffaut introduces a narrative style that can serve any purpose or style.

We are not explained everything about the characters' behaviors, but we have room and clues to try. Unlike whatever or whoever controls their fate, Jules and Jim have to follow the succession to their choices with not a single idea of what awaits them at the end of the line. They don't even care. The moment they surrendered themselves to Catherine, the background went out of focus, and there are only two things that will carry and englobe them: their relationship with Catherine, and with each other.

The film takes place before, during, and after WWI. After being face to face with death at the front, after fearing the loss of each other, they don't want to miss out on anything: Jim will pursue Catherine with Jules's blessing, Jules won't leave Catherine and will try not to be jealous of his friend. Catherine, who has become increasingly uncomfortable, capricious and unstable, won't give anything up either. It isn't as easy as it sounds.This all happens during the second half of the film, which transcurs in an uncomfortable ease and is full of beautiful, sad images. Truffaut refrains from passing moral judgement and simply proceeds to take us to the unavoidable tragic finale.

The story has so much emotion running through it I found it very engaging. It made me angry at the characters just as much as it made me want to meet them an play a domino match in their empty beach house.

Truffaut's camerawork is wonderful. He could uncover different aspects, or unite different aspects, of a scene, with a traveling camera (he used a hand-held camera). He thus amplified the reach of a single scene, and made the entire film move. Truffaut also tried to give it an extra edge with several freeze-frames.

Complex, daring, beautiful. Jules and Jim is those three things. It's alive, fast, full of wit and humor, with sudden fits of melancholy. Truffaut's experimentation feels like curiosity and excitement, not pretentiousness, and his subject matter and the delicate way in which he treats it feels audacious, not sensationalist. Once more I admire his storytelling, and the innocence that permeates all of his craft.