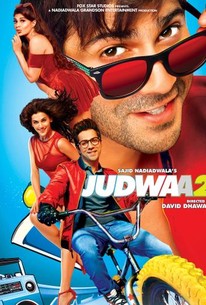 Two brothers (twins) born to an honest businessman are separated at birth when their father exposes a smuggling racket and a king pin. One of the brothers is thought to be dead but only resurfaces stronger after living life on the streets to reunite with his family over a sequence of events and twist of fate. Genetically bound by reflexes both the brother's lives interlink in strange ways and a comedy of errors. They eventually come together to destroy the smuggling nexus and save their family from a downfall that awaits them.

For a comedy whose plot would make a wafer look thin, the lines have to be razor sharp, and delivered in just the right rhythm. This is where the director falters...

There is a fine line between portraying a person with a disability and turning that person into a caricature. Nandu, played by Rajpal Yadav, crosses that line.

Rather than slightly raising the lowest common denominator, we're still hearing things like "Alex, relax" in a Gujarati accent and seeing things like a hopelessly screechy Upasana Singh channeling her inner Bindu...

The one-liners are quite hilarious and most of them hit the mark.

Dhawan tries desperately to milk the nostalgia (if you can call it that) for the 90s comedy that Judwaa 2 is a reboot of.

It's basically innocent fun meant to pander to the child in you.

Meena Iyer
The Times of India

This is popcorn entertainment at its mindless best.

There is a host of ensemble actors who add nothing to the film's humour quotient, and saunter in and out of the screen with no purpose.

Judwaa 2, like the original, isn't a piece of art, in fact it's mediocre, but it's that one film which may lift your mood.

Everybody in Judwaa 2 overacts, and the dialogues feel like they were written by an adolescent for his high school drama.

There are no featured reviews for Judwaa 2 at this time.