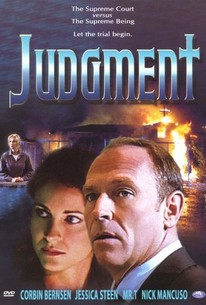 A woman accused and her lawyer risk their lives to defend the rule of God in this Christian drama, the third sequel to Apocalypse: Caught in the Eye of the Storm. In the near future, a One World government led by the despotic Franco Macalousso (Nick Mancuso) rules the globe, and he's taken it upon himself to stamp out fearless Christian activist Helen Hannah (Leigh Lewis), whose followers oppose his leadership. Macalousso has Hannah arrested on charges of crimes against humanity, and attorney Mitch Kendrick (Corbin Bernsen) is given the assignment of representing her in court. Victoria Thorne (Jessica Steen), Kendrick's former girlfriend, has been selected to prosecute Hannah in a trail orchestrated to conform to Macalousso's dictates. But the longer Kendrick spends preparing his defense of Hannah, the more deeply he's touched by her message, and he chooses to ignore his orders and defend Hannah's beliefs by refocusing the case on the existence of God, rather than the supposed crimes of Hannah. Apocalypse IV: Judgment also features Mr. T as J.T. Quincy, one of Hannah's supporters.

Christopher Britton
as Guard
View All

With good production values and a Battlefield Earth level of overacting, it manages to be as engrossing as it is silly.

There are no featured audience reviews yet. Click the link below to see what others say about Judgment!