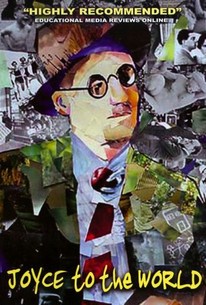 Many literary historians and bibliophiles regard James Joyce's 1922 Ulysses as the single most vital novel published in the English language; a cornerstone of college courses everywhere and a subject of continual analysis, it even inspired a perennial holiday named after the iconic main character, Leopold Bloom: Bloomsday, June 16th (the day on which the story unfolds). But what specifically accounts for the novel's peerless status and literary reputation - peerless enough that it would prompt fans to drink a pint and dress up like their favorite characters in its honor? Fritzi Horstman's documentary Joyce to the World sets out to provide exhaustive answers to these questions, initially by examining the chronology of Joyce's life itself (from his childhood in Dublin to his eventual exile with his wife in such locales as Zurich and Pula) and then by interviewing celebrities from various disciplines who comment on the impact that Ulysses has made on them, including Brian Dennehy, Frank McCourt and Fionnula Flanagan.

Critic Reviews for Joyce to the World

There are no critic reviews yet for Joyce to the World. Keep checking Rotten Tomatoes for updates!

There are no featured reviews for Joyce to the World at this time.

Joyce to the World Quotes