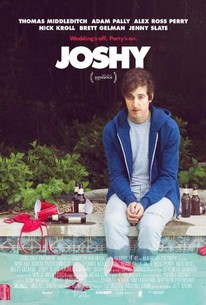 After his engagement suddenly ends, Joshy and a few his friends decide to take advantage of what was supposed to be his bachelor party in Ojai, California. In their attempt to help Joshy deal with the recent turn of events, the guys turn the getaway into a raucous weekend filled with drugs, booze, debauchery, and hot tubs. Written and directed by Jeff Baena, featuring a score by Devendra Banhart and an ensemble cast of hilarious comedic talents-including Thomas Middleditch (HBO's "Silicon Valley"), Adam Pally (TV's "Happy Endings"), Alex Ross Perry (director of Queen of Earth), Nick Kroll (TV's "The League"), Brett Gelman (TV's "Married") and Jenny Slate (Obvious Child) -Jeff Baena's sophomore feature is a wickedly amusing portrayal of male bonding and emotional incompetence. JOSHY will be released by Lionsgate Premiere in theaters and On Demand August 12.

Luis Fernandez-Gil
as The Spaniard

It's a fascinating depiction of the way men do -- or don't -- confront life's tragedies and traumas.

You probably wouldn't want to spend that much time with these people yourself, but at least they're never boring.

"Joshy" is like a weekend with random friends: fun and familiar, but rarely any deeper than the personalities involved. Don't look for more and you'll be fine.

Baena delivers a quiet and largely plotless dramedy that walks the line between goofy bro comedy and mumblecore drama.

An engagingly perceptive and often darkly funny glimpse at wrestling with issues of adulthood after a life of seemingly endless adolescence.

Joshy is a little underwhelming when you first watch it, but the more you think about it and let it marinate, it tends to grow on you.

It takes Joshy a little while to find its footing after a truly shocking opening scene, but once it does there's a nice story about friendship in the toughest times.

... Joshy would have succeeded had it felt comfortable enough it its own skin to play out without a third act twist that ultimately derails everything that has been set up.

Few movies about groups of male friends do such a strong job with the dynamics between individual people and the collection as a whole.

Ultimately, Joshy claims to be a story in defense of its main character's right to a story all his own, even though the film never steps away from him long enough to make us consider that this was even a palpable threat.

Joshy is perhaps best viewed as a revision of The Hangover, and several other weekend bromances... all too eager to imitate, if not advertise, the illusory notion that senselessly participating in fraternal rites of passage will lead to happiness.

White people problems seem to be tantamount in this indie/black comedy. Fortunately, Joshy's struggle is more universally resonant and to the film's comedic elements' benefit, peripheral. The film revolves around a talented comedy cast dealing with their own relationship issues and existential ennui, all the while delivering some very effective (mostly improvised) laughs. There is typical indie cringe comedy dotting the transitions: at it's best it is better than anything in "The Hangover", at it's worst it is no better than any dull episode of "The Office". The structure and thematic elements seem to be a much less heavy-handed version of Guillaume Canet's "Little White Lies", but unlike that film it always stays funny, even amidst the more somber moments. Particularly impressive is the underlying paranoia of a who-done-it murder mystery that permeates the comedy. It is an interesting tone, and makes "Joshy" stand out from the standard indie-comedy genre.