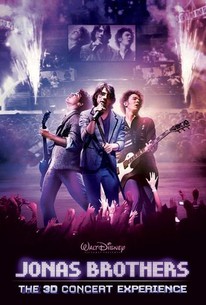 Critics Consensus: Jonas Brothers: The 3-D Concert Experience should please the brothers' adoring followers, but for non-converts, this concert film is largely flat and unenlightening.

Critics Consensus: Jonas Brothers: The 3-D Concert Experience should please the brothers' adoring followers, but for non-converts, this concert film is largely flat and unenlightening.

Critic Consensus: Jonas Brothers: The 3-D Concert Experience should please the brothers' adoring followers, but for non-converts, this concert film is largely flat and unenlightening.

Denise Jonas
as Herself

Kevin Jonas Sr.
as Himself

Alwyn Wright
as Strings
View All

This does pretty much what it says on the tin, though the interactive "3D" element does introduce a twist of sorts.

Hate the songs. What a lot of hair they have. Don't ask me the names.

The songs wash over in waves of such turgid mediocrity that by the end you're praying for it to stop. Thankfully, after 76 minutes, it does - and all is well again.

The movie, sadly, perpetuates the corporate myth that they are musical tyros, boyband savants and the sweetest virgins in the business.

This TV-special-sized feature comprises songs from the trio's recent Burning Up tour, along with gobbets of behind the scenes action.

Accompanying parents can don blindfolds and ear-plugs and indulge in the sweet fantasy that they are somewhere, anywhere, else.

There's no plot, no character development, no dramatic arc. It just plops you smack down in the epicenter of the JoBro musical youthquake, and away you go.

Teen sensations can put on an impressive act, just don't ask them to fake-act their "rock-star life."

The film features two guest spots with other artists from the Disney stable, Demi Lovato and Taylor Swift. Swift is a star of the future, and I guess you can bet on her own 3D film in the pipeline, but Demi Lovato, whoever she is, oughtn't give up her day

Fans of the Jonas Brothers, Pavlov and Freud should be equally satisfied for a 75-minute stint.

...the film boasts a preaching-to-the-converted vibe that effectively holds newcomers at arm's length throughout.

canned and created by committee

Imagine it's Saturday night in February 2009 in California. Not only do you have two weeks off work, but you also got a huge paycheck and a date with your best friend cute sister to the theaters. She chooses an awful movie she wants to watch in 3D and once the movie is over you find your date is asleep. Even to this day this is the most unimpressive 3D movie I've ever seen. They throw fireworks, pigeons, glasses, and other stuff right in your face to the point you just want to take off your glasses. Another thing I really didn't need to see was the Jonas Brothers shirtless in my face. It's no wonder the documentary is clearly scripted since the band is really boring. We learn nothing about them and basically shows them being happy with their money when they're not playing music. We don't even get to see how the concert is even put together or anything on technical sides. The concert itself is by far the worst and most underwhelming thing ever put to filmed. All they do is sing horribly and it's not easy hearing them when their fans won't shut up for a second. Which reminds me, the footage of their fans are crazy, you'll be surprise to see how many people like their music. I even saw guys fainting when they saw the Jonas Brothers, these people need to listen to better music. Now time to talk the music itself, it sucks allot. Most of the Jonas Brothers songs are about girls with poorly written lyrics. The beginning one of their songs starts pointlessly with "I woke up on my roof with my brothers. There's a whale in the pool with my mother. And my dad paints the house different colors", would you believe these lyrics are for song that's about not caring about what people think of you. There songs are simply awful, even their breakup songs are upbeat like they're glad they got their hearts broken. There song "Brunin' Up" was the title of the tour so they save this song for last, which also sucks. Read these lyrics and tell me if this is sounds remotely good "I'm hot, you're cold. You go around like you know. Who I am. But you don't. You've got me on my toes". Pointless is best to describe all their songs. The only time there's any good music are when Demi Lovato and (out of nowhere) Taylor Swift are on stage, but unfortunately the Jonas Brothers have to ruin it when they join in. This was a waste of good money for me. Its completely unnecessary use of 3D, a boring concert, awful songs, boring in general, and plus my date slept through half of it makes this one of the worst documentary ever made by Disney . If you like music in general Stay away from this mess it's not worth your time.

Okay, so this concert movie was certainly not the worst moviegoing experience this reviewer has had recently (that distinction belongs to a 6 foot 5 inch man dressed unconvincingly as a woman). Thanks to the 1 hour and 15 minute running time, he could even say that he was entertained for a generous portion of the program. The best that can be said about The 3D Concert Experience is that it gives non-fans a front-row seat to the modern equivalent of Beatlemania (and no, this does invite further Beatles references—some things are, after all, sacred). But such movies are only as good as their music—-and for Jonas devotees, this cinematic event must have been a loo-loo. For others though, there are enough theatrics to fleetingly catch – though certainly not captivate – moviegoers’ attention. Tailor-made for the tween-aged Disney audience, however, the movie is nothing more than a glorified music video with a dubious 3-D tie-in. In Jonas Brothers: The 3D Concert Experience, a G-rated documentary, the Jonas Brothers’ 2008 ‘Burning Up’ concert tour is chronicled…in three dimensions. The movie begins with a staged ‘bit,’ which stands out as one of the movie’s chief weak points. Concert movies work best when the audience is also given an all-access (excuse the expression) behind-the-music P.O.V. Even when the Jonas Brothers are seen clowning-—sadly, it seems that they are very aware of the camera. Still, they put on a hell of a show as do the guest artists…only the 3-D parts are few and far between. Bottom line: 4-Fans.