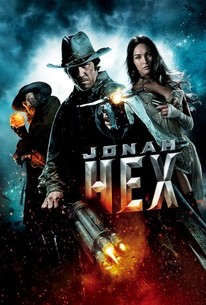 Critics Consensus: Josh Brolin gives it his best shot, but he can't keep the short, unfocused Jonah Hex from collapsing on the screen.

Critics Consensus: Josh Brolin gives it his best shot, but he can't keep the short, unfocused Jonah Hex from collapsing on the screen.

Critic Consensus: Josh Brolin gives it his best shot, but he can't keep the short, unfocused Jonah Hex from collapsing on the screen.

1970s-era DC antihero Jonah Hex makes his way to the big screen as co-screenwriters Mark Neveldine and Brian Taylor (Crank, Gamer) team to follow the disfigured gunslinger and part-time bounty hunter on his biggest adventure yet. Supernatural elements combine with Western aesthetics to take viewers on a wild and bloody ride, with Josh Brolin leading the way as Hex and John Malkovich stepping into the villainous role of Turnbull. Jimmy Hayward (Horton Hears a Who) directs. ~ Jason Buchanan, Rovi

Will Arnett
as Lieutenant Grass

Jonathan Bell
as Roughneck at Tent

Vincent Riverside
as Roughneck at Tent

Maureen Brennan
as Mother on Train

Jake Radaker
as Boy
View All

The film shows its comic-book origins in good ways (stylish settings) and bad (too many scenes end in a gigantic conflagration).

It just gets louder and more nonsensical as it progresses, with Fox shoe-horned into as many scenes as possible.

At least it's relatively short.

It's a loud and subtle-as-a-sledgehammer assault on the senses, though, at 81 minutes, mercifully short.

Jimmy Hayward's film is a cartoonish melange of cliché set-pieces seemingly ripped straight from the pages of the comic with no thought as to how they would make a coherent on-screen narrative.

The wildly dissonant tone caroms so haphazardly between self-satire and self-seriousness (sometimes within the same scene!) that it's impossible to form anything resembling an attachment to the characters or situations.

The really sad part is that Josh Brolin is great as Jonah...

It's popcorn-chomping fun rooting for the soul-stripped Hex as he battles his way toward redemption and sweet, sweet payback.

It's a little too brief to get bored exactly, but it's certainly long enough to get frustrated at the lack of the essential ingredients to get the audience engaged in its story.

It's a standard Western revenge tale dressed up with supernatural elements.

I'll start by saying that I've seen my faire share of bad film, and to be honest, Jonah Hex wasn't that bad of a film. Of course it's a ridiculous affair, a film that is shallow in its story, but is somewhat entertaining despite its significant flaws. I didn't hate the film, but I felt that it could have been much better as well. I've seen my fair share of bad films, and I got to say that Jonah Hex is nowhere near the ineptitude garbage that films like Movie 43 and Texas Chainsaw were. This is somewhat entertaining, albeit it doesn't do anything really good with its ideas, and it does squander its potential. The film is mindless popcorn action, and it's decent at best, but it's definitely not great. I liked some aspects of the film, and the comic book vibe the film had was quite good, but the script was just empty, and the film's ideas never really took off. Jonah Hex for me anyways, isn't as bad as I thought it was going to be, but it's not a good film either. The film should have been much better than this, as there were some appealing things about it, however due to a lacking script, the film's ideas never come to fruition and it does make you wonder how good this film could have been if the screenwriters would have reworked the story a bit more. For metal fans, you'll probably enjoy Mastodon's soundtrack, and the cameo by the band's guitarist Brent Hinds as a Union Soldier. Not as bad as what I expected, but it does leave a bit to be desired, however I must say that I have seen far worse films than this one. At least this film had a few entertaining action scenes, if only the plot had been reworked, then this film really could have been something special.

The premise based on the comics has potential: a gunslinger who was so close to dying that he can now talk to the dead, while trying to stop a megalomaniac terrorist. The most pleasant surprise of the supernatural Western mix is the cast and how many well-known people show up in rather small and surprising roles. They may feel a tad underused but on the other hand it's fun to see them all come together. The less pleasant surprise is the kind of film they joined in. It does have it's moments and is rather entertaining, but also pretty damn shallow when it comes to dialogs and action. The shootouts are always rather short (and with the type of shredding metal guitars, that seem to imply speed and excitement but are just annoying), the characters remain flat. The short running time of the film implies that the creators were not that happy with it, either and tried to make it out alive as fast as possible.

Mixed feelings about seeing this one.

It is what it is. Nothing too spectacular here. Just decent action. Okay acting. Just well what it is.