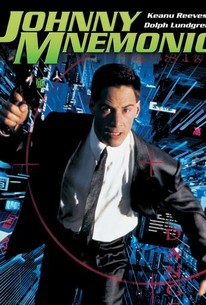 This Canadian sci-fi action feature is set in the grim, heavily computerized future. It is the tale of Johnny, a young man with a computer chip implanted in his head. The chip contains a wealth of top-secret information that he must smuggle from Japan to the US. He is pursued by an evil yakuza who wants the information for his own mega-corporation. Johnny evades him and makes it to the Free City of Newark where he is to be downloaded. He must hurry because if the information isn't removed soon, his head will explode. While in Newark, he is chased by a loin-cloth wearing villain who wants his head, which he will keep alive until the information has been retrieved. In the end, Johnny's information is successfully downloaded amid spectacular computer-generated graphics.

Robin Crosby
as Girl in Hotel Room
View All

You can have a better time title-scanning Johnny pics in an alphabetical video guide than you can enduring the latest Blade Runner knockoff: Johnny Mnemonic.

Johnny Mnemonic is one of the great goofy gestures of recent cinema, a movie that doesn't deserve one nanosecond of serious analysis but has a kind of idiotic grandeur that makes you almost forgive it.

Its a shame that the whole design is so tacky, the realization so simple, devoid of resources and imagination, and that is impossible to highlight anything good about the cast. [Full Review in Spanish]

Reeves showcases his considerable thesping skills in a climactic monologue about... room service.

Disappointing sci-fi. Good portrayal of the implications of being a human hard drive, but little action and no real villain.

Should have called it "Johnny Moronic"

Couldn't a psychic dolphin have told them not to bother?

Seriously, it's not that bad. Don't beat me.

The future's most wanted fugitive. Good enough movie! The plot was a cliche cyber-thriller and you must have known that even just buy the back of the box or the trailer. It delivered a plot that was kind of cool, an star that does some one-liners, and action. If these three things were not what you wanted from this film then you shouldn't have went. It just delivers an action/adventure movie, nothing short of what promised. Don't be critical on films that are obviously intended as sheer dumb fun from start to finish... if these scripts even tried to be thinker, they'd be boring. Overall, its a very interesting sci-fi flick which has its ups and downs. In 2021, the whole world is connected by the gigantic Internet, and almost a half of the population is suffering from the Nerve Attenuation Syndrome (NAS).Johnny with an inplanted memory chip in his brain was ordered to transport the over loaded information from Beijing to Newark. While Pharmakom Industries supported by yakuza tries to capture him to get the informaiton back, the Low-tech group led by J-Bone tries to break the missing code to download the cure of NAS which Johnny carries.

Speaking of garbage cinema, here's another to add to the pile. You may like Keanu Reeves but you have to admit it - he is absolutely awful in this. We all know he's no Oliver Reed or anything, but my god, he is atrocious in his role of "Just Johnny." This is full of bad dialogue from beginning to end, but it still has some charm to it. Maybe it's due to my love for Blade Runner and anything resembling it that I liked it, but I won't ignore how crappy it is. I enjoyed it for the most part, but it made me cringe at times, which isn't good. I hear there's an extended version floating around out there somewhere and I'd like to see it sometime. Will it remedy everything? Doubtful, but it'll be interesting nonetheless.

I should really re-watch this movie before writing about it, I barely remember it...