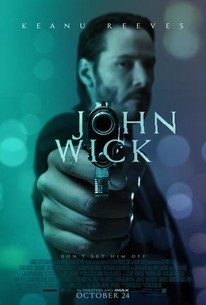 Critics Consensus: Stylish, thrilling, and giddily kinetic, John Wick serves as a satisfying return to action for Keanu Reeves -- and what looks like it could be the first of a franchise.

Critics Consensus: Stylish, thrilling, and giddily kinetic, John Wick serves as a satisfying return to action for Keanu Reeves -- and what looks like it could be the first of a franchise.

Critic Consensus: Stylish, thrilling, and giddily kinetic, John Wick serves as a satisfying return to action for Keanu Reeves -- and what looks like it could be the first of a franchise.

An ex-hitman comes out of retirement to track down the gangsters that took everything from him. With New York City as his bullet-riddled playground, JOHN WICK (Keanu Reeves) is a fresh and stylized take on the "assassin genre". (C) Lionsgate

John Wick works because of its sleek, artisanal dovetailing of style and sincerity.

Its saving grace is the sheer operatic excess of the bloodletting.

Just when you have all but given up hope for Keanu Reeves... there comes the hyper-stylised revenge movie John Wick. And you remember what you loved about him in the first place.

A pretty humourless and violent film, which grinds on and on with more and more gleaming black SUVs getting trashed.

It's not perfect. But it is special, especially for a mid-budget Hollywood action drama, and it has stuck firmly in my mind since that late-night screening last Friday.

Stahelski and Leitch, both former stunt men, unsurprisingly tackle action sequences with glee... but the quieter scenes are more sophisticated, incorporating a sense of fantasy and visual splendor that almost makes the wafer-thin plot feel fresh.

John Wick is the slick, empty, cruel hero the age of Trump deserves - but hey, at least he likes dogs!

Occasionally ridiculous, it is action-packed, stylish and a return to form for Mr Reeves.

The script defines an amazing microcosm that surrounds the profession of the protagonist. [Full Review in Spanish]

Simply put, John Wick is probably one of the best action movies in a decade. From an efficient story to incredible fight sequences and an action start that just doesn't seem to quite, John Wick is as close to perfect as I've ever seen.

Directed by long-time stuntmen David Leitch and Chad Stahelski, it is exactly the sort of movie you would expect from long-time stuntmen: brutal, close-up fighting, nearly nonstop gunplay and the slightest story legally allowed.

Why does it work? That's probably a better question. On paper, this movie falls somewhere between Commando and Taken in terms of getting from Point A to Point B, but in execution, John Wick just feels like a special journey.

For those who like Taken and its sequels, here is a much more stylish, gripping and smart action movie that boasts an awesome soundtrack, thrilling fight scenes and a badass Keanu Reeves shooting, kicking and proving that he can be an action movie star like few others.

Boring, violent crap. Who enjoys this s€+t? Not me, I like an actual story, not just non stop mindless fighting.

When John Wick hit the cinemas back in 2014, the trailers made it look cool and stylish, but it really did look like another cash-grab film for Keanu Reeves, which is why the box office did not return much. Having said that, the audience that did make their way to the cinema, fell in love and so did the critics. Personally, although I did enjoy myself in the theatre, it took a while to grow on me. With such a simple premise, usually a film like this would fail miserably, but this is too awesome of a film to pass up, surprisingly. Earning a sequel due to its extremely positive feedback, John Wick is still a blast to watch, and here's why. Starting with a very somber tone as he is grieving the recent loss of his wife, John Wick receives one last gift from her. A puppy shows up on his doorstep as a memory. Being his last remaining attachment to his late wife, he begins to love and care for this dog, but not for too long, as men invade his home, steal his car, and murder his dog. From there, a revenge plot sets itself in motion and the film pretty much never lets up on its action until the final moments. Although it begins on a sad note, there is more than enough entertainment to compensate and ultimately forget about the past and look forward to him kicking some serious ass. Although this film is well-intentioned, there really isn't a single person to latch onto, aside from the titular character. Willem Dafoe's portrayal of the villains main henchman, who also has a deep past with John Wick, was a nice addition, but ultimately just a plot device later on in the film, which was a bit of a letdown for me. His character, although soft-spoken, was the most interesting side character, because everyone else are the most disposable characters I have seen on-screen in quite some time. That being said, I think that's exactly what the filmmakers were going for here. They set out to make a fun action flick and they delivered it in spades. You come to see a film like this for the action. There is no way around that. Whether you are a die hard fan of the action genre or just a casual one, you should know what you are in for when going into a film like John Wick. With a silly, yet serious premise like murdering a dog to get a hitman out of retirement, it's pretty self-explanatory that it would become an all-out action film by the end. With a club sequence that will be remembered by action fans for years and years, to some incredible fight choreography, John Wick is one of the better modern-day action flicks, especially when talking about original properties. In the end, if you haven't seen this film yet, but are still curious about watching it, just know what you are in for. This is more like a Point Break than it is a Matrix or Speed, in the way that it knows not to take itself too seriously. Looking back on this film, it seems as though the upcoming John Wick: Chapter 2 will be for John Wick, what The Raid 2 was to The Raid. John Wick really is just a fun little introduction to this character, filled with some incredibly done action sequences, some very precise camerawork, and a performance that comfortably puts Keanu Reeves back on the map. This is one kick-ass action movie that I can watch anytime I feel that I'm in the mood, even though there isn't much substance to it. Let's be honest though, are you really going into this film expecting The Godfather?

Great revenge thriller that grabs you right by the collar after a few minutes and doesn't let go for the next action-packed 90 minutes. The violence is pretty graphic but very stylishly filmed, Reeves minimalist acting fits perfectly here, although he does show he's capable of much more in a couple of scenes. It's refreshing that amidst all the violence, the film does not take itself too seriously, introducing cool minor characters and despicable villains and just keeps delivering the action goods, driven by a fitting soundtrack. A highlight of the genre of recent years.