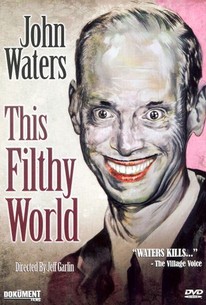 In this filmed version of cult film director John Waters' popular one-man show, the Pink Flamingos and A Dirty Shame director takes the stage to discuss everything from his early influences, fondest career memories, and notorious struggles against the MPAA rating system. Part endearing memoir and part hilarious lecture, This Filthy World touches on everything from the insanity of contemporary pop culture to the director's unforgettable early collaborations with inimitable Pink Flamingos star Divine. Captured live at the Harry du Jur Playhouse in New York, this performance is filled with the unique brand of outrageous insight and candid wit that has earned the so-called "Prince of Puke" an eternal place in the hearts of mischief-loving miscreants everywhere.

John Waters delivers a lecture, part-memoir, part-stand-up, on his life in movies, and proves himself an oddly winsome anecdotalist.

As well as being a cult movie legend, John Waters turns out to be an excellent stand-up comic and all-around raconteur.

If you don't know what helicoptering and blossom are, they will be forever etched on your consciousness by the time Waters takes his bow.

Waters' genial depravity, ear for a good line and fine comic timing easily engages for the full length despite the lack of flashy tricks, or indeed, any tricks at all.

Fans of his films will appreciate that Waters offers at least one witty anecdote about each.

This may just be a film of one of Waters' university appearances, but it's thoroughly entertaining as he takes a trip through his own filmography, hilariously revealing all kinds of truths about society along the way.

At 61-years-old, Waters is growing old in disgraceful fashion. Avid fans will know some of the shtick already but nothing can compare to hearing it from the horse's filthy mouth.

Waters still has the audience-friendly filth to remind you exactly who this is talking, and by the closing credits words such as "bears" and "blossoming" have lost their innocence.

A fun fim from a fascinating man.

Mildly amusing at first, but picks up the humor in the last half.

Oh Johnny, how you cracked me up with your filth, I love you to bits. It's just one pop culture reference after the other. I am a total fan of his, he's the best!!

One of the few stand-up comics who can actually make me laugh out loud.