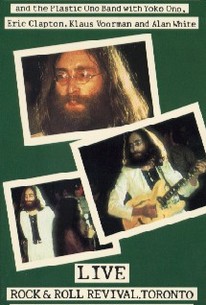 This music documentary is produced and directed by the same filmmaker who brought Monterrey Pop to the screen. It features performances from a 1969 Toronto rock 'n roll festival. The film shows performers Jerry Lee Lewis, Little Richard, Eric Clapton, Bo Diddley, Alan White, Klaus Voorman and John Lennon and Yoko Ono with the Plastic Ono Band. Although many other people appeared in the 12-hour-long festival, the filmmaker chose to record the whole performances of these few, rather than give highlights of the entire festival. Festival-goers booed and walked out on a performance by Yoko Ono and her brand new Plastic Ono Band. Film reviewers at the time were similarly affected. Latterly, though, both her performance and this film have grown in interest and watchability, particularly given the rarity of such thorough documentation of these key performers' work in concert.

There are no critic reviews yet for John Lennon and the Plastic Ono Band: Sweet Toronto. Keep checking Rotten Tomatoes for updates!

There are no featured reviews for John Lennon and the Plastic Ono Band: Sweet Toronto at this time.