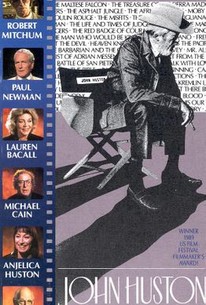 One of Hollywood's most distinguished directors, John Huston is profiled in this no-holds-barred documentary. Discounting the hokey framing device of host Robert Mitchum wandering through an attic full of Huston memorabilia, this two-hour plus film is a remarkable chronicle of a remarkable man. We follow Huston's vagabond younger days, first as travelling companion to his equally colorful actor father Walter Huston, then as one of Hollywood's premiere hell-raisers. Huston worked as a screenwriter in the 1930s before getting his first chance to direct with The Maltese Falcon (1941). During World War II, Huston turned out a "propaganda" film titled Let There Be Light, which was so devastating in its depiction of shell-shock that the government ordered that it be removed from distribution. After the war, Huston directed such masterworks as Treasure of the Sierra Madre, Asphalt Jungle, Moulin Rouge and Moby Dick, as well as a few debacles (notably the benighted Red Badge of Courage). He also tilted with the infamous House UnAmerican Activities Committee. Declared washed up on several occasions, Huston kept bouncing back, even into the 1980s with such films as Under the Volcano and Prizzi's Honor. Included are interviews with such Huston associates as Paul Newman, Lauren Bacall, Arthur Miller, Michael Caine, Oswald Morris and Burgess Meredith, as well his former wife Evelyn Keyes and his actress daughter Anjelica Huston, with home-movie clips of the director at work and play. Nowhere is John Huston's try-anything-once lifestyle treated as admirable; still, it does seem like he had a hell of a good time. John Huston: The Man, the Movies, the Maverick was produced for Cable TV by Turner Entertainment.

Robert Mitchum
as Narrator
View All

Critic Reviews for John Huston - The Man, the Movies, the Maverick

There are no critic reviews yet for John Huston - The Man, the Movies, the Maverick. Keep checking Rotten Tomatoes for updates!

There are no featured reviews for John Huston - The Man, the Movies, the Maverick at this time.

John Huston - The Man, the Movies, the Maverick Quotes