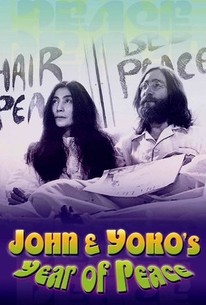 In 1969, John Lennon married performance artist Yoko Ono, but while many couples would use their first year together to put their house in order, John and Yoko instead opted to use their celebrity and the media attention focused on their wedding to speak to the world about their favorite cause -- world peace. From their famous "bed-in for peace" to meetings with several of the world's political leaders, the couple created what they once described as an "advertising campaign for Peace" while the War in Vietnam raged on; it was a possibly naive but inarguably heartfelt gesture towards making the world a better place which solidified the couple's reputation as global activists. John & Yoko's Year Of Peace is a documentary produced for Canadian television which presents archival footage of Lennon and Ono's anti-war crusade, and interviews with Ono and her friends and contemporaries in which they recall the whirlwind peace campaign; speaking with Lennon and Ono in the newsreel segments are cartoonist Al Capp, media theorist Marshall McLuhan, and then-Canadian Prime Minister Pierre Trudeau, among others. ~ Mark Deming, Rovi

Critic Reviews for John and Yoko's Year of Peace

There are no critic reviews yet for John and Yoko's Year of Peace. Keep checking Rotten Tomatoes for updates!

Audience Reviews for John and Yoko's Year of Peace

There are no featured audience reviews yet. Click the link below to see what others say about John and Yoko's Year of Peace!