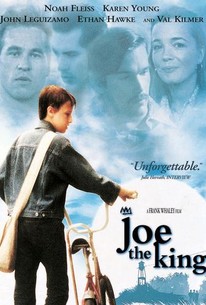 Actor Frank Whaley (from Swimming With Sharks) makes his directorial debut with this film about coming of age in the 70's. Joe The King made its premiere at the 1999 Sundance Film Festival, where it also won a screenwriting award. Joe is a nine year old boy (Noah Fleiss) who doesn't play with other children. Embarrassed that his father (Val Kilmer) is a janitor, Joe unsuccessfully tries to keep it a secret. Joe's father is also an abusive alcoholic who beats his wife and destroys her things (including her record collection). Taking his life in his own hands, Joe begins working as a dishwasher in a restaurant. He uses his salary (and more that he steals from the cash register) to help himself and his family, including paying off his unemployed father's debt and replacing his mother's record collection. Eventually Joe is caught and sentenced to a juvenile prison. Everyone takes Joe for granted, including his parents, who don't even come to see him on his one day of freedom. The film also stars Ethan Hawke as a guidance counselor.

Mitchell Fleiss
as Cop No. 1

Critic Reviews for Joe the King

The film is so steeped in resentment that it's not able to pull back and let us see the boy behind the shield of his misery.

Even with warts and all, "Joe the King" is a very worthwhile drama.

An uncompromising but wonderful film that reinforces the saying 'Never judge a person until you've walked in their shoes.'

A very tough, very real film, anchored by the memorable work of the two leads.

An excellent piece of entertainment. The cast is undeniably brilliant.

a deeply sad picture of mistreated youth, told with considerable skill, and blessedly shorn of sentimentality

Audience Reviews for Joe the King

What a depressing movie!? That poor kid! It really makes you wonder just how many kids are suffering that way on a daily basis. It also makes you appreciate what you've got.