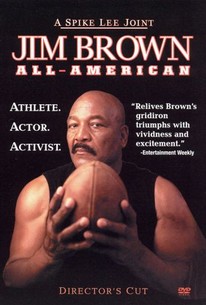 Spike Lee's documentary on the football star, movie actor, and social activist is a no-frills examination of a man who has rarely been out of the public spotlight for over 45 years. Jim Brown talks about the various phases of his life, from his boyhood in the all-black community of St. Simons Island, GA; to his adolescence on Long Island, where he became a multi-sport star athlete; to his college days at Syracuse University; to his nine-year career as the NFL's leading running back with the Cleveland Browns; to his days as an action star in Hollywood films; to his work with various social programs, many designed to help inner city youth. Among the many interview subjects are Art Modell, the onetime owner of the Browns; former Cleveland Brown teammates Dick Schafrath, John Wooten, Bobby Mitchell, Paul Warfield, and Walter Beach; filmmaking colleagues Fred Williamson and Bernie Casey (both football players turned actors), Raquel Welch, Oliver Stone, James Toback, Melvin Van Peebles, and Stella Stevens; Kim Brown and James Brown Jr., two of Brown's children from his first marriage; and Rockhead Johnson, a former Los Angeles gang leader and officer of Brown's Amer-I-Can organization. Lee does address Brown's ongoing legal problems over various assault charges, many of them involving women, and he tracks down a onetime Brown lover who in the mid-'60s wound up in the hospital after an incident at his Los Angeles home. Brown appeared in a supporting role in Lee's film He Got Game. This film, co-produced by HBO's sports division, was released theatrically for a limited run; a version running 114 minutes premiered on HBO several months later.

Jim Brown
as Himself

Only an epic documentary could get it all down, and Spike Lee's Jim Brown: All American at long last gives its subject a movie worthy of his talents.

As the movie traces Mr. Brown's athletic exploits, it is impossible not to be awed by the power and grace of one of the greatest natural sportsmen of modern times.

Lee's achievement extends to his supple understanding of the role that Brown played in American culture as an athlete, a movie star, and an image of black indomitability.

Since Lee is a sentimentalist, the film is more worshipful than your random E! True Hollywood Story.

Treating the [controversial] incidents with kid gloves allows Jim Brown: All-American to fit into the encomium template, but a more forthright approach is demanded.

What Lee does so marvelously compelling is present Brown as a catalyst for the struggle of black manhood in restrictive and chaotic America...sketchy but nevertheless gripping portrait of Jim Brown, a celebrated wonder in the spotlight

Once the sports and film clips run out, Lee doesn't have much more to work with than talking heads, and they aren't enough to keep anyone but diehard sports fans interested.

[Lee] treats his audience the same way that Jim Brown treats his women -- as dumb, credulous, unassuming, subordinate subjects. And Lee seems just as expectant of an adoring, wide-smiling reception.

A well-rounded tribute to a man whose achievements -- and complexities -- reached far beyond the end zone.

There are no featured reviews for Jim Brown: All-American at this time.