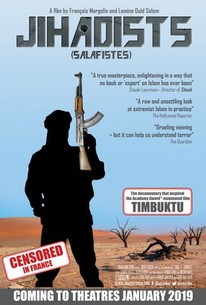 Banned in France (released as 'Salfistes'), JIHADISTS goes deep into the heart of the Salafi movement, to reveal the inner workings of extremist Islam. A pair of Western filmmakers were granted unparalleled access to fundamentalist clerics of Sunni Islam who proselytize for a "purer" form of Islam--including jihad of the sword--in Mali, Tunisia, Iraq and Afghanistan. Their theoretical interpretations are juxtaposed against images and footage from recruitment videos to show the hardline application of sharia law. Without experts contextualizing these events, the film, which inspired the Oscar-nominated feature, "Timbuktu", paints a stark portrait of everyday life under jihadi rule.

Quite fascinating and scary.

While there is a certain abject fascination in the unvarnished reality on display... the lack of an off-screen voice saying "Yeah, but ..." is ultimately maddening.

A terrorist mixtape that appears remarkably uninterested in presenting these men in a more critical way than they would want.

A chilling documentary banned in France, but available in America despite fatwas, thanks to this country's undying commitment to freedom of speech.

Consistently enraging and unflinching, but monotonous, tedious and shallow.

Filmmakers risk their lives getting up close and personal with some terrifying people.

Damning "in their own words" look at jihadism and its (mostly, in this documentary) African adherents.

There are no featured reviews for Jihadists (Salafistes) at this time.