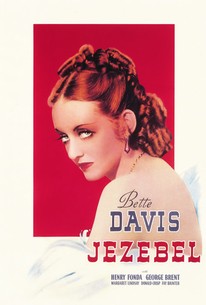 In 1938, Jezebel was widely regarded as Warner Bros.' "compensation" to Bette Davis for her losing the opportunity to play Scarlett O'Hara in Gone With the Wind. Resemblances between the two properties are inescapable: Jezebel heroine Julie Marsden (Davis) is a headstrong Southern belle not unlike Scarlett (Julie lives in New Orleans rather than Georgia); she loves fiancé Preston Dillard (played by Henry Fonda) but loses him when she makes a public spectacle of herself (to provoke envy in him) by wearing an inappropriate red dress at a ball, just as Scarlett O'Hara brazenly danced with Rhett Butler while still garbed in widow's weeds. There are several other similarities between the works, but it is important to note that Jezebel is set in the 1850s, several years before Gone With the Wind's Civil War milieu; and we must observe that, unlike Scarlett O'Hara, Julie Marsden is humbled by her experiences and ends up giving of her time, energy, and health during a deadly yellow jack outbreak. Bette Davis won an Academy Award for her portrayal of Julie; an additional Oscar went to Fay Bainter for her portrayal of the remonstrative Aunt Belle (she's the one who labels Julie a "jezebel" at a crucial plot point). The offscreen intrigues of Jezebel, including Bette Davis' romantic attachment to director William Wyler and co-star George Brent, have been fully documented elsewhere. Jezebel was based on an old and oft-produced play by Owen Davis Sr.

Trevor Bardette
as Sheriff at Plantation

Charles B. Middleton
as Officer
View All

Even the historical backdrop - primarily with the paranoia, death, and destruction from the yellow jack epidemic - are no match for Davis' fiery persona.

Bette Davis, more restrained than usual, sometimes subtle, and none-the-less powerful, does the wilful Southern belle to a crisp.

The immortal 1950 masterpiece All About Eve is the movie that houses Bette Davis' best performance, but certainly ranking in the top five would be her mesmerizing turn in this Civil War-era melodrama.

A tottering costume drama that gave Bette Davis one of her rare non-bitchy roles. It should come as little surprise that it doesn't quite work.

Jezebel is fascinating from a cinematic history perspective, but it's also a strong melodrama beyond the societal backdrops

Directed with taste and discretion by Wyler, the film has several poignant scenes, such as the one in which Henry Fonda ferociously forces Bette Davis to dance in her red dress, while staring down at anyone who appears critical of her code violation.

It would have tasted more like lemonade than a mint julep without Bette Davis' fiery performance.

The film is much more interesting for its traces of Davis' own future roles and images than for its decoy status as a GWTW consolation prize.

The overall slant of the entire movie is a sort of half-hearted indictment of the Old South's code of ethics that was rooted in slavery.

A minor melodrama that came as a consolation prize for Davis, who didn't get the main role in Gone with the Wind - and, just like in that film, the protagonist is a spoiled, impudent woman who likes to manipulate the men around her. The highlights include the elegant dialogue and Davis' fierce performance.

A Southern belle attempts to manipulate her societal standing and buck social norms. Half the film of its ilk, Gone with the Wind the best example, Jezebel is a classic Southern society drama that assumes as normative racism and misogyny. Julie Marsden (Bette Davis) attempts to pervert the typical Southern culture, but she is "put in her place" by happenstance and her male "betters." Her rebuke symbolizes the film's tacit acceptance that there is such a thing as a "woman's place," and though Davis's performance is enticing and often funny, there's nothing a great actress can do to recover a failed story. Most offensive is the film's portrayal of African-Americans. Elided are the whippings, yearnings for freedom, and the forced labor, and these depictions are replaced with numerous shots of "happy Negros," content with their lower caste and more than willing to serve their "better" white folk. They speak in affected accents, and conscious of the film's problematic portrayal, the modern closed caption writer translated the film's "Yessum" to "Yes, ma'am," a phrase no African-American character actually utters. Overall, despite strong performances by Henry Fonda and Davis, the film's offense and its plodding story cannot be forgiven.

Jezebel is the 1938 precursor to "Gone With The Wind". Bette Davis stars as a southern belle doomed to lose her fiance and her social standing when she dares to wear a red dress to a ball (GASP!@!) It's enough to make any southern belle a life-long pariah. When her former beau (the miscast Henry Fonda) comes back into her life, she tries everything she can to scheme her way back into his heart. The old pre-civil war south has long fascinated Hollywood as it's the closest thing America ever had to a royal "noble class" (the elite upper crust of society). Everything was a question of manners and the wrong word could result in a duel between two gentlemen. Of course the slavery issue is given short shrift, this was made in the pre-civil rights era 30s, and besides, slavery doesn't hold quite the same romance as the Jezebels and Scarletts of that time period. Regardless of political correctness, there's just something uninteresting about this film, whether it's the storyline or the script, I can't be sure. Bette Davis gives a fine performance, but this story of a woman who wears the wrong dress to the ball can hardly compare with the scope and granduer of the magnificent "Gone With The Wind".

With many similarities to GWTW, this melodrama depicts New Orleanian genteel society directly before the War Between The States. Davis is a spoiled, manipulative ingenue with her intentions set on rising banker Fonda, only he refuses her golden puppet strings much to her consternation. An entertaining piece until its rushed and contrived ending.