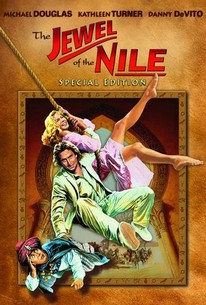 Critics Consensus: The sense of romantic spark has waned and the prevalence of stereotypes has grown in Jewel of the Nile, although there is still plenty of swooning action for fans of the first adventure.

Critic Consensus: The sense of romantic spark has waned and the prevalence of stereotypes has grown in Jewel of the Nile, although there is still plenty of swooning action for fans of the first adventure.

The Jewel of the Nile Photos

The Jewel of the Nile takes up where Romancing the Stone left off, with romance novelist Joan Wilder (Kathleen Turner) traveling around the world with her boyfriend, Jack Colton (Michael Douglas). But Joan is becoming bored with Jack and all the romantic attention; as she asks, "How much romance can one woman take?" Invited by Omar (Spiros Focas), a wealthy Arabian potentate, to travel with him to his homeland, Joan readily accepts. Jack decides to pass on the trip, preferring instead to sail through the Mediterranean. It turns out that Omar wants to usurp the role of an Arab holy man known as "The Jewel of the Nile" (Avner Eisenberg), and Joan finds herself thrown in prison with the hapless spiritual leader. Jack comes to the rescue, teaming up with the slapstick bad guy from Romancing the Stone, Ralph (Danny DeVito). Together, the foursome have to cross North Africa in order to escape Omar's minions. ~ Paul Brenner, Rovi

News & Interviews for The Jewel of the Nile

Nicolas Cage as "The Sorcerer’s Apprentice"?
"X-Men," "The Fountain" Added To Cannes Line-Up
Michael Douglas Returns for Another "Stone" Sequel

View All The Jewel of the Nile News

Critic Reviews for The Jewel of the Nile

Director Lewis Teague uses the frame the way a magician uses a hat or a handkerchief: surprises are always popping into it, or out of its shadows.

It's to everybody's credit that The Jewel of the Nile is an ambitious and elaborate attempt to repeat the success of the first movie; it's not just a ripoff.

It's a fairly amusing bit of escapist fluff-as long as you remember to hit the "off" button on your political consciousness when the theatre starts to darken.

Turns unnecessarily nasty with its racist depiction of Arabs and a barrage of racist jokes.

Reunited and it feels so bad.

OK, but weak sequel to the first Douglas-Turner outing.

If there's ever a good example as to why sequels are rarely as good as the original, it is The Jewel of the Nile.

While it's definitely not an awful little adventure flick, Jewel of the Nile stands as a pretty good indication as to why the guys never reunited for a third adventure.

Jewel of the Nile doesn't quite reach the heights of Romancing the Stone, but it's still a lot of fun and better than most sequels.

Not much sparkle to this sequel.

Audience Reviews for The Jewel of the Nile

Again we have the 'Indy' comparison with this sequel. 'Temple of Doom' came out in 84 then along comes the sequel to the original 'Indy' rip off in 85 and again its another poor mans version in my opinion. On top of that we're back to the most common terrain for all adventure flicks...sand dunes in the desert. Now the original film was slightly adult in nature, swearing, soft sex scenes, drugs and slightly more mature action. This time the film has gone completely down the comedy route by amping up the action set pieces ten fold but making them more slapstick than before. The first half of this film feels like a complete 'Temple of Doom' spin, yes I know its set in Egypt but the whole look and feel and the way Turner's character is treated is very similar to 'Doom' at the start. As the film progresses it does manage to shake the 'Indy' vibe and instead could possibly be seen as an early influence for certain Brendan Fraser adventure flicks...well that's just my view. Unfortunately the film just can't escape the need to follow in 'Dr Jones' footsteps so we have an entire action sequence involving a jet plane that is pretty similar to the Nazi plane fight sequence in 'Raiders of the Lost Ark'. Well 'Indy' comparisons aside (hard to do) the film is still pretty poor. Its chock full of plot holes and inconsistencies which are just silly. Yes I know you can't take the film seriously as at the end of the day its just a fun adventure film but come on!. For a start the trio (Turner, Douglas and Eisenberg) seem to walk and jog across half of Egypt (or somewhere in North Africa) for most of the film. One minute they are being chased by soldiers across a flat desert, the next minute after a brisk jog they are in a mountainous region and manage to climb up a huge cliff face without need for pause or water at any point!. Plus I must add I was never sure where exactly they are suppose to be in North Africa. One minute they're in the fictional nation of 'Kadir', then they stray into Nubian land, then back into Arabic land, they cover a lot of ground it seems. Its all in the same region but its a big region. I guess the continuity is good from the last film, same cast, I don't like the cast but they gel well. Devito has an even bigger comedy role this time and is still completely not funny, almost turning his character into a kind of 'Wil E. Coyote' farce this time, shameful. Speaking of shameful, the less said about the cheap looking sets the better methinks, whoa! Its admittedly cult 80's action fluff but I just can't give a thumbs up for this or the original. This is worse than the first as its been dumbed down badly, at least the first was more mature. You can certainly see where many other adventure flicks in recent years may have gotten inspiration as this has all the ingredients you would expect. Again the films poster is really good but this time gives a good impression of the action to be seen.

The sequel to Romancing the stone does combine the familiar elements: Douglas and Turner arguing while DeVito is trying to con his way through the search for the jewel, which turns out not quite what he may have expected. Even more so than the original the film tries to be a new Indiana Jones film, which of course it is not. Especially the playful banter always feels a bit forced, but the action is decent enough. The showdown may fall a bit shirt, but it's still an okay piece of entertainment for a sunny afternoon.

The best 80s sequel ever made!!!! This was an extremely good sequel. You have Michael, Kathleen & Danny. What more could you ask for?! Lol. :) A very enjoyable 80s classic! :)

Michael Douglas and Kathleein Turner made a great couple on screen. The Jewel of the Nile has tiny bit of everything. Adventure, Humor, action, and so on.

The Jewel of the Nile Quotes