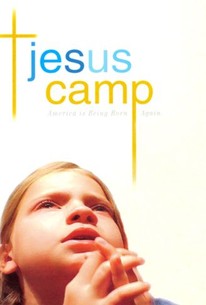 Critics Consensus: Evangelical indoctrination is given an unflinching, even-handed look in this utterly worthwhile documentary.

Critics Consensus: Evangelical indoctrination is given an unflinching, even-handed look in this utterly worthwhile documentary.

Critic Consensus: Evangelical indoctrination is given an unflinching, even-handed look in this utterly worthwhile documentary.

The youngest foot soldiers for the Lord are shown in their native environment in this documentary. Becky Fischer is a children's pastor who runs "Kids on Fire," a summer camp for evangelical Christian children in North Dakota. Fischer believes in the political and moral importance of a Christian presence in America, and uses her camp to reinforce the religious training most of her charges are already receiving at home (the majority of the campers are home-schooled by their parents). Using video games, animated videos, and group activities to help put her message across, Fischer encourages the kids to pray for George W. Bush and his Supreme Court appointees while urging them to help "take back America for Christ." For the most part, the children seem reasonably ordinary beyond the fact they pray with uncommon fervor and sometimes speak in tongues. Along with Fischer and her cohorts, Jesus Camp features interviews with Ted Haggard, an evangelist and advisor to George W. Bush, and Mike Papantonio, a Christian talk-show host who believes the right-wing slant of many Christian evangelists is taking the church into a dangerous direction. Jesus Camp was directed by Heidi Ewing and Rachel Grady, who previously made the acclaimed The Boys of Baraka. ~ Mark Deming, Rovi

Free Movies Online: 200 Fresh Movies to Watch Online For Free
Lion, Night of the Living Dead, The Salesman, and More on Netflix and Amazon Prime This Week
Oscar Night Approaches; Who Will Win? Our Predictions Inside!

Why bother with horror films when you can see this?

Some lively material - but nothing new.

This unabashedly liberal documentary tries to redress the balance by giving the rest of America a wake up call: not all scary fundamentalists come strapped with explosives.

No matter your religious or political affiliation (or lack thereof), this supremely even-handed documentary from Heidi Ewing and Rachel Grady is cinematic dynamite.

It's almost impossible not to respond emotionally to this fascinating, sobering and all-too-brief exploration of the politicized religious right and its hopes, dreams and power.

Heidi Ewing and Rachel Grady deliver a disturbing message about contemporary America through the eyes of children.

After the filmmakers' 200th shot of kids weeping at the words of the lord, the message changes from educational to freak show.

The filmmakers are more hands off than your average agitdoc director, but their point is unmistakable.

Jesus Camp doesn't just preach to the converted, it bores and frightens them.

Eye-opening look at the Evangelicals among us.

A disturbing, unflinching portrait of religion and its effects on children when in the hands of psychotic strangers and bad parents.

It is appalling to see the nefarious effects of religion and the fundamentalist indoctrination of children carried out by those ignorant, delusional ministers who are so strongly committed to brainwashing them into becoming a bunch of fanatics and turning the USA into a theocracy.

I knew this movie was going to make me angry before I even watched it.

Christ wept when he came to know that I'd been subject to this piece of shit. It's devastating to know that this sheer nonsense was nominated for Oscars. The fact that it was so much successful is more disturbing than watching this rubbish documentary. Amen.

Funny and interesting in the way it shows these people however I can see it being slightly offensive to them which is wrong of the filmmaker. They're clearly biased but in a way these people mark themselves as victims with this over the top behaviour. An eye opener, certainly.