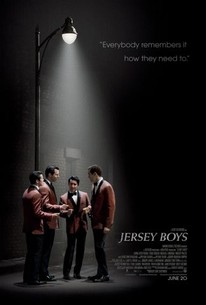 Critics Consensus: Jersey Boys is neither as inventive nor as energetic as it could be, but there's no denying the powerful pleasures of its musical moments.

Critics Consensus: Jersey Boys is neither as inventive nor as energetic as it could be, but there's no denying the powerful pleasures of its musical moments.

Critic Consensus: Jersey Boys is neither as inventive nor as energetic as it could be, but there's no denying the powerful pleasures of its musical moments.

Clint Eastwood's big screen version of the Tony Award-winning musical tells the story of the four young men from the wrong side of the tracks in New Jersey who came together to form the iconic `60s rock group The Four Seasons. Their trials and triumphs are accompanied by the hit songs that influenced a generation, and are now being embraced by a new generation of fans through the stage musical.(c) Warner Bros.

David Storm Newton
as Guy at the Bar

David Newton
as Guy at the Bar

Billy Gardell
as Our Sons Owner

A scattered, haphazard, thoroughly confused film that can't figure out if it's meant to be a winningly cutesy musical or a gritty narrative about life in crime-ridden 1950s New Jersey.

Christopher Walken plays a gangster who can fix anything; maybe he should have taken charge of the film.

It's just that there's a particular combination of looseness, swagger, camaraderie, melancholy and melody in the last sequence; the film itself is solid and entertaining, but right at the end it all comes together in a moment of imaginative flight.

Jersey Boys comes to life only toward the end.

It's glossy and entertaining but also safe and conventional. If my father had lived to age 72, he would have loved this movie. This is your target audience.

At times the movie version of "Jersey Boys" captures the electric excitement of the musical, but for every soaring moment, there are 10 minutes of bickering or brooding.

An American Dream story with an authentic period piece feel due to clever filmmaking.

Whatever you call it, it operates under the same purpose as trying to fit a donut through a keyhole.

Clint Eastwood's cinematic treatment of musical Jersey Boys plays it safe in nearly every possible regard.

This well-crafted screen adaptation is not about to let the hits (Sherry, Oh What a Night, Big Girls Don't Cry etc.) do all the heavy lifting, allowing the storytelling to get off lightly.

Jersey Boys is almost frustrating in a way. The entire time we are aching for the film to wow us. Sadly, it never really does.

Yes, there's no Eastwood stamp stylistically, but he directs superb performances from the central quartet - and commendably without a whiff of jazz hands.

A dull, uninvolving and derivative biopic full of the clichés that Eastwood has by now become an expert on, and it doesn't give us any reason why this story deserves to be told or what makes those characters remotely interesting besides Frankie Valli's voice.

Though there is little in the way of directorial ingenuity, Clint Eastwood's "Jersey Boy" is a delightfully light (R-rated) musical biopic following the quick rise and slow burn demise of the Frankie Valli fronted "The Four Seasons." Though Eastwood's film is too long and feels a little like Scorsese-light (especially in it's earliest moments), the performances are on point. I liked the cast, the musical numbers, and the largely rudimentary biographical drama. It hasn't dethroned the stage play by any stretch of the imagination, and Eastwood's cut-and-paste approach to directing this material is disappointing. However, "Jersey Boys" is old fashioned storytelling that I had no problem getting behind based on it's strengths and infectious soundtrack.

It's clear that Clint Eastwood doesn't understand the first thing about making a musical. He grossly mishandles the source material. What made the original such a joy was the wonderful plethora of hit songs from the Four Seasons, not the generic Behind the Music-style story. Eastwood highlights the weakest aspects of the play while de-emphasizing the music. The elephantine length clocks in at 2 hours and 15 minutes, but it feels twice that long. It is a laborious chore to sit through. It's a full hour before we even hear a recognizable Four Seasons song. Granted the singing is the best part. That's because the music is inherently good. But the musical numbers are realized with all the excitement of a trip to the dentist. They should be lively and innovative. Instead the actors come out, hit their mark, sway while they sing and leave. This is a movie for goodness sakes. You could do things here with color, lights, effects, to punch up the production that you can't on the stage. Music videos take advantage of this fact, why can't this movie? There's one example of that spirit in the whole picture. It happens at the end as they are rolling the credits. Oh what Bill Condon or Baz Luhrmann could have done with this material. fastfilmreviews.com

Bob Guadio: I never heard a voice like Franki Valli's. After eight bars, I know I need to write for this voice. I suppose it comes to no surprise that the soundtrack to Jersey Boys, the Tony Award-winning-jukebox musical-turned movie, is a good one. Bringing on many involved with the original show led to some solid vocal performances that really let the scenes featuring The Four Seasons and others show off their singing abilities. I only wish the rest of the film had the kind of spark that made me enjoy scenes of songs that I have heard plenty of times before being performed. It was nice to see director Clint Eastwood head in a different direction for the kind of film he wanted to make, but unfortunately his old school talents did not really assist bringing this old school group onto the big screen. read the whole review at thecodeiszeek.com