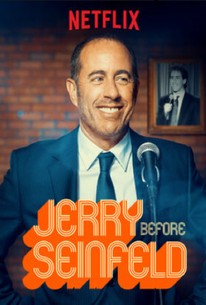 Critics Consensus: Jerry Before Seinfeld finds its star revisiting his earliest material on his hometown stage, offering appropriately familiar - yet still abundant - laughs along the way.

Critics Consensus: Jerry Before Seinfeld finds its star revisiting his earliest material on his hometown stage, offering appropriately familiar - yet still abundant - laughs along the way.

Critic Consensus: Jerry Before Seinfeld finds its star revisiting his earliest material on his hometown stage, offering appropriately familiar - yet still abundant - laughs along the way.

Jerry Before Seinfeld: Jerry Seinfeld returns to The Comic Strip for an intimate ​stand-up ​ set at the club that helped launch his career. Interspersed with never-before-seen material -- including a library of legal pads with every joke he's written since 1975, childhood videos, and more -- Jerry performs the jokes that put him on the comedy map in an hour-long stand-up special, only on Netflix.

News & Interviews for Jerry Before Seinfeld

View All Jerry Before Seinfeld News

Critic Reviews for Jerry Before Seinfeld

I laughed a lot during "Jerry Before Seinfeld."

There might not be any earth-shattering revelations about his rise to fame, but there's still enough to excite a comedy super-fan's interest.

Seinfeld works the cramped stage of his old haunt with not only the effortless and inevitable confidence of the old pro and cultural touchstone he is, but with an enthusiasm belying any hint of obligation.

It's wry observation and it is as intensely funny as it is an intense avoidance of anything political or dark.

It's the best kind of minimalist comedy television. Just a comic, a mic, a stage and an audience.

This is watching a craftsman at work.

Here is a comic performance that's from the ages, and for the ages. It doesn't get any better than this.

Jerry Seinfeld is as funny and observant as ever in Jerry Before Seinfeld.

But repackaged with a new narrative, those same jokes can hold up some 40 years later. Inside The Comic Strip, Jerry Seinfeld can be cool once more.

Fans of the man, who arguably invented post-modern observational comedy "about nothing" (and yet about everything), will be delighted by the set-up.

Truth be told, Seinfeld's ambitions are still admirably humble for having a reputation so massive.

Audience Reviews for Jerry Before Seinfeld

There are no featured audience reviews yet. Click the link below to see what others say about Jerry Before Seinfeld!