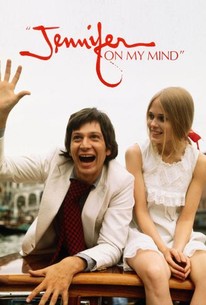 Jennifer on My Mind Photos

One of a number of films that dealt with addiction following the explosion of recreational drug use in the 1960s, Jennifer on My Mind opens as footloose twentysomething Marcus (Michael Brandon) is wandering through Europe. In Venice, he meets a beautiful young woman named Jenny (Tippy Walker); they fall in love, start travelling together, and smoke an awful lot of marijuana. When Jenny decides to return to the United States and heads back to New York, Marcus tags along, but before long (as usually happens in films of this sort), Jenny moves from pot to harder drugs, and Marcus has to deal with the fact the woman he loves has become a heroin addict. Written by Erich Segal, who had earlier gained fame for Love Story, Jennifer on My Mind also features a prescient supporting performance by Robert DeNiro, who plays a taxi driver.

Critic Reviews for Jennifer on My Mind

The characters are a couple of simple-minded clods and the dialog is not so much sentimental as drippy.

Audience Reviews for Jennifer on My Mind

There are no featured audience reviews yet. Click the link below to see what others say about Jennifer on My Mind!

Jennifer on My Mind Quotes