Jay and Silent Bob Do Degrassi The Next Generation (2005) 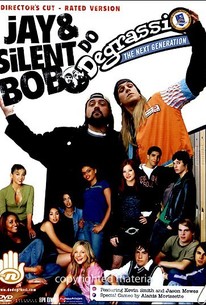 Kevin Smith and Jason Mewes head north to film their next movie in which their alter egos are forced to go back to high school called "Jay and Silent Bob Go Canadian Eh?" And what better high schoool to shoot at that Degrassi Community School? But drama ensues even before the cameras begin to roll! The Director's Cut edition includes the extas: Kevin Smith Exclusive Interview Commentary by Kevin Smith Jason Mewes and more Five Minutes of never before seen footage Bloopers Extended/Deleted Scenes and much much more!

There are no critic reviews yet for Jay and Silent Bob Do Degrassi The Next Generation. Keep checking Rotten Tomatoes for updates!

yes i saw it and once again, not a movie.

Lol, I love Jay & Silent Bob, and Degrassi is a guilty pleasure of mine, so the two together should work!

Jay and Silent Bob Do Degrassi The Next Generation Quotes