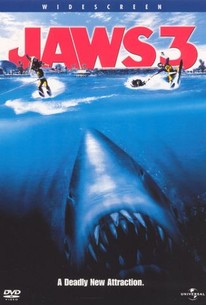 Critics Consensus: A cheese-soaked ocean thriller with no evident reason to exist, Jaws 3 bellows forth with a plaintive yet ultimately unheeded cry to put this franchise out of viewers' misery.

Critic Consensus: A cheese-soaked ocean thriller with no evident reason to exist, Jaws 3 bellows forth with a plaintive yet ultimately unheeded cry to put this franchise out of viewers' misery.

Produced in 3-D for the theatre, the great white escapes its tank at Sea World and terrorizes the town.

Laura Tracy
as Girl in Tunnel

Will Knickerbocker
as Man in Crowd

Put in a baking tray, gas mark 7, and enjoy a turkey.

It's harmless but unsurprising.

The shark gets more time on screen than before only it's not a wise decision, as it remarkably looks cheaper than in the last film.

It certainly isn't the greatest film in the world -- it's sloppy, full of holes and none too convincingly acted -- but for all that, it is an intermittently enjoyable popcorn entertainment.

Jaws 3... points to the lack of creativity in the current North American cinema. [Full Review in Spanish]

Marred by laughable 3-D effects, Jaws 3 is a difficult film to take seriously.

No movie with Dennis Quaid holding a basset hound's ears to keep them out of his water bowl while pouring himself some coffee can be all bad. Jaws 3-D comes pretty close.

Jaws 3-D ultimately suffers from the same problem as many cute animal films aimed at kids. It spends far too much of its time on boring humans and their boring relationships.

A living testament to how low a studio will stoop to generate a few bucks.

So hokey and so incredibly incompetent in execution that it feels less wicked in its ignorance and more like a comic relief hillbilly, of the sort seen in this very movie's water-skiing interludes.

Reaching new depths of terror! One of the worst sequels ever in the history of bad sequels! Overall this is just a bad film. I'm not a big one for lists so I'll not play that game here but it is pretty much without any value at all. The plot is poor, the effects are rubbish, the direction is weak, the script just a load of nonsense and there is a total lack of tension, thrills or excitement. The original is a classic and this film is further proof that sometimes classics should be just left alone. Michael Brody and Sean Brody, the sons of former Amity police chief Martin Brody, work at Florida's Sea World, a seaside park run by Calvin Bouchard. Sean befriends Kelly Ann Bukowski, and Michael's girlfriend Kathryn Morgan is Sea World's head scientist who always works with Sea World's dolphins Cindy and Sandy. In its man-made lagoon, about 40 feet under the water, Sea World opens the Undersea Kingdom, a new set of underwater glass tunnels that have their own control room, and Calvin's friend Philip FitzRoyce is there to do some filming. When Sea World diver Shelby Overman vanishes, everyone is worried. Michael and Kathryn head into the water, where they find a baby great white shark and decide to bring it to Sea World to put it on display, but at Sea World, the baby shark dies. When Overman's body is found, Michael vomits when he sees it. Kathryn looks at the body and knows that the baby shark could not have been the shark that killed Overman, because the baby shark's bite radius is too small its 35-foot-long mother killed Overman. When Kathryn and Michael tell Calvin and Philip about the shark, they all try to evacuate the park, including the park's beach, as they try their best to protect Sea World's visitors from the shark.

Unlike Jaws 2 I have no respect for this film and the fact that it tries to relate itself with the classic film by Mr. Spielberg. Shame on you Joe Alves.

Jaws was a good blockbuster, Jaws 2 was an Ok blockbuster. This is an excuse to cash in on the first one. The 3D in the cinema was as bad as this movie overall.

Holy mother of god, this is one of the worst films I have ever seen. Every single aspect of it (editing, acting, special effects) is completely botched to the point of accidental comedy. This is one of the funniest films I have ever seen, but for all the wrong reasons (and I mean all of them). Highly recommended if you have friends over and want to make fun of a movie, but if you are looking for serious entertainment, don't even think about watching it.