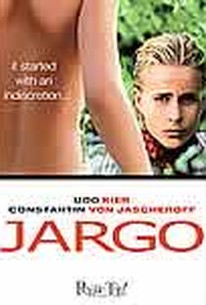 A handsome boy on the brink of adulthood finds his quest to become a man leading him down a dangerous path in director Maria Solrun's dark coming-of-age tale. Jargo (Constantin von Jascheroff) has everything a young man could want; a lavish home in Saudi Arabia and more money than he knows what to do with. When his father (Udo Kier) suddenly and unexpectedly commits suicide, however, Jargo is forced to relocate to a Berlin housing project, where he strikes up a friendship with young Kamil (Oktay Özdemir). A low-rent Turkish criminal who quickly teaches his new friend the ropes while inducting him into the drug-addled world of all night raves and beautiful girls, Kamil begins setting into motion a daring plan to rob the Filipino cigarette mafia. As the day of the heist draws near and Kamil discovers that the disloyal Jargo has cemented his manhood by sleeping with Kamil's girlfriend, Mona, the spurned lover hastily amends his plan to include a dangerous trap for his naïve, onetime friend. ~ Jason Buchanan, Rovi

A mind-numbing feature that will have you disparaging the future of Teutonic youth.

There are no featured reviews for Jargo at this time.