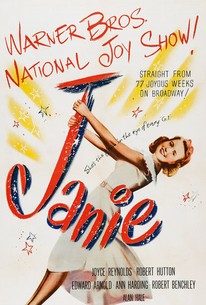 Janie, adapted from the Broadway play by Josephine Bentham and Herschel Williams, was one of a 1940s cycle of stage-to-film comedies about teenagers. Joyce Reynolds stars as Janie, a typical teen whose life is turned topsy turvy by the installation of a military base near her home town. Edward Arnold and Ann Harding, exasperated and understanding respectively, play Janie's parents. Robert Hutton is the soldier and Richard Erdman the hometown boy who vie for Janie's attentions. The film is cloying at times, but survives as a reasonably accurate representation of teenage life in the war years, right down to the "coded slang" used to throw parents off the track. Janie ends with the Army marching out and the Marines marching in, leaving the door wide open for a sequel, which appeared in 1946 under the title Janie Gets Married.

Kirk Barron
as M.P.
View All

Joyce Reynolds has understood the importance and meaning of her difficult role, shading her with unparalleled grace and with the simplicity and naturalness of a veteran artist. [Full review in Spanish]

There are no featured reviews for Janie at this time.