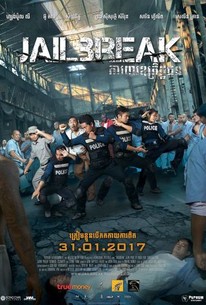 ambodia's traditional martial art of bokator is unleashed in all its bone crunching fury in this action-packed tale of police trapped in the midst of a raging prison riot.

Fans of fight films should be entertained somewhat with the first half of the film but most will eventually get bored with the same fights in a rinse and repeat pattern.

Overall, "Jailbreak" is an impressive action film, in a no-nonsense style that reminded me much of "Riki Oh", although with a toned down gore element. Fans of all the spectrum of exploitation are bound to love it.

For what it is worth, it is what it is and fans of this genre should be happy.

A whirlwind of action, containing some of the best fight scenes you'll see this year.

Good-natured, silly, and surreal, Jailbreak is on a mission to provide audiences with relentless levels of fun. There's a sense of humor throughout that is occasionally as broad and internationally palatable as a Jackie Chan project.

A genuine surprise and delight, and not just for martial arts fans.

Whenever the dust is allowed to settle, Jailbreak's cracks and seams quickly become visible, but it does show undeniable promise for Cambodian action cinema.

Jailbreak has been called a Cambodian The Raid... Jailbreak is more like a Cambodian Merantau, but if you know your Indonesian martial arts movies, that's still awesome.

Overall, Jailbreak is an impressive effort and will likely appeal to fans of the fight scenes in The Raid. Just don't expect to be as impressed by anything outside of the kinetic, expertly choreographed clashes.

You wouldn't get this kind of madness in a Hollywood action film, but its unimaginative fight scenes are more typical of Western filmmaking than the stylish madness of the East.

What's still most impressive about Jailbreak is its sense of playfulness.