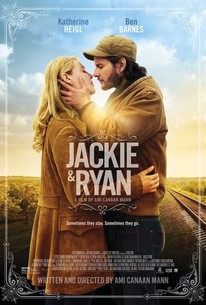 Ryan Brenner (Ben Barnes) a travelling musician and Jackie Laurel (Katherine Heigl) a former singer at a crossroads in her marriage, have a chance encounter while Ryan is busking on the streets of Ogden, Utah. After a sudden car accident propels them together, Ryan finds himself at Jackie's house for dinner. Ryan's battling to find the courage to write his own music while Jackie's fighting for independence from her estranged husband who wants her to return to their upscale Manhattan marriage. When Ryan's musician mentor dies in a train accident and Jackie's husband threatens to take custody of her daughter, Ryan and Jackie find the strength and music they need in each other. What they don't know is, if the paths they choose will lead to one another. (C) EntertainmentOne

Karlee Broschinsky
as Girl on the Bike

Gilda Cersosimo McBride
as Woman in the Party

Adam Dietlein
as Wes
View All

If a film based on author Nicholas Sparks' work is like an over-produced power ballad with a 128-piece orchestra, writer/director Ami Canaan Mann's "Jackie & Ryan" is the non-ironic acoustic guitar cover of the same tune.

"Jackie & Ryan" may prove too low-key and deliberately paced for less patient viewers, but distinct pleasures are to be had from this compactly shot film's easy rhythms, affecting tone and nicely modulated performances.

You anticipate a cheap, sentimental ending. But it is not to be, and the movie is much the better for it.

The section of the movie that should offer a climactic rush, however fleeting, feels instead more like falling action, or even a postscript.

Jackie & Ryan is a sort of low-rent Nicholas Sparks romance that, for want of a better way to put it, never generates any sparks of its own.

[Jackie & Ryan] is about a pair of struggling people trying hard to make everything alright.

There's a familiar tune to this modest low-budget romance about musicians who fall in love, yet it's given a fresh spin by a set of charming performances and a screenplay that generally sidesteps cliches.

A romance of a gentle, bittersweet, grownup variety that doesn't pretend that every connection has to be a grand, sweeping, happily-ever-after thing.

It's refreshing to see a romance-even a slightly tepid one-that acknowledges and even embraces its transient nature.

I watched a little off this, but it is painfully slow and drags. Dull more than bad. I turned it off after 40 minutes. Updated 30/4/18 - on a bit of a Katherine Heigl kick and decided to rewatch this. Still extremely slow, especially the opening scenes, but I liked it better on a second watch. Definitely more slice of life than amazing story, but it is nice and I liked the ending.

That was a good movie. I liked it. I enjoyed it. It was a good relaxing movie, you know? Fun to watch... It has a good ending. Katherine Heigl was good in it. - She did a good job.