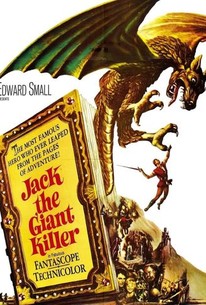 Nathan Juran, director of The Seventh Voyage of Sinbad, tries to make the magic happen again on a much more attenuated budget in Jack the Giant Killer. Torin Thatcher, another Sinbad alumnus, plays a wicked wizard who kidnaps toothsome-princess Judi Meredith. Kerwin Mathews, still another veteran of Sinbad, plays Jack, who rescues Meredith and promises to escort her to safety. Stop-motion animator Jim Danforth creates several fire-breathing perils along the same lines as Ray Harryhausen's special effects in Sinbad; happily, Danforth emulates the Harryhausen style without stooping to imitation. Prominent among the supporting actors is Don Beddoe as an impish genie. In the recently reissued prints of Jack the Giant Killer, most of the original voices have been dubbed over, and incongruous musical numbers added.

Don Beddoe
as Imp in Bottle

Ken Mayer
as Boatswain
View All

Far more persuasive than the jerky demonic creatures (including a griffin and an octopedic sea monster) is Torin Thatcher's sinister, Lugosi-like performance as the wicked Master of Demons.

This shrill and clumsy serving of one of the most beloved of fairy tales is a pretty crude affair.

[A] charming and enjoyable fairy tale.

Although no classic like The 7th Voyage of Sinbad -- and missing that picture's true star, visual effects wizard Ray Harryhausen -- this is nevertheless rousing entertainment.

In spite of its obvious flaws (inferior animations), Jack the Giant Killer is movie magic that's rife with rich fantasy and winsome playfulness.

Stop-action animation, blue-screen work, matte backgrounds, and a rollicking fantasy story make this one for the ages.

Yes that's right, before the dreadfully bland CGI update there was this much better film, I bet many of you didn't know the 2013 film was an updated remake huh. This film is loosely based on the old fable 'Jack the Giant Killer' and not the fairytale 'Jack and the Beanstalk'. The film takes place in merry old England, Cornwall, which is ruled by a good king. At this time the Princess is being crowned so she may rule as Queen, but the evil banished sorcerer 'Pendragon' returns and tricks the King and Princess into accepting a gift that will eventually steal her away back to the evil sorcerers castle. Long story short Jack is chosen to set sail for this castle and rescue the Princess in true fairytale style. What really hits you about this film straight away is the lavish production values. Immediately in the first scene you can tell this film had a lot of highly skilled people working on it from costumes to sets and props. Everybody in every scene looks quite elegant in their royal fairytale ceremonial splendour, of course its not meant to be realistic so its all bright colours, bold makeup and lots of artistic license by American's on what old England apparently looked like. You can easily compare this film to 'The Wizard of Oz' in terms of in your face technicolour. The characters are nothing exciting really, stereotypical hero, Princess, King, evil wizard, slimy sidekick etc...its all here and utterly cliched to the hilt. But this is 1962, this is what they did back then, the difference was the charming performances by the stars and the quaint yet magnificent visuals. Once again Torin Thatcher steals the show as Pendragon the evil sorcerer (great name). Despite looking like Emperor Ming the Merciless this character is perfectly dastardly and gloriously sinister, the facial hair helps. What I love about Torin (and many old stars of the silver screen) is the fact you can understand every word he says, his speech is perfect, his motions are perfect...the man was a perfect performer. Yes his performance would be viewed by today's standards as ultra cheesy, yes it is very pantomime-like, but its so enjoyable to watch and hear him speak. Listening to him plot his devious schemes whilst rubbing his claw-like hands together is just so cool. Kerwin Matthews is once again our hero and he does a sterling job of it too. Admittedly his performance mirrors his performance for 'Sinbad' to the point that they could be the same character but hey the guy was dashing. Effects wise this film is poor, really really poor, Harryhausen quality stop motion you say? No. The action sequences involving stop motion are absolutely awful, some of the worst I've ever seen, it looks like a child has made the creatures out of play-doh. On top of that the creatures are laughable, just horrible! Worst ever!! Really ruins the film to be honest. The giant 'Cormoran' also looks suspiciously like the cyclops from 'The seven voyages of Sinbad', hmmm. There is also much bluescreen/superimposing as you might expect with a film like this, some not too bad, some nasty, but that's a given. A true family film to be sure, the visuals are a display of classic fairytale pageantry set within the classic story of goodies vs baddies. Torin and his spooky crew of glowing demon-like witches are the best thing going here as they all prance about in their cobweb ridden castle. You feel yourself wanting to shout out 'he's behind you!!' at times, its all very cute. Think the Wicked Witch of the West and her flying monkeys...but much much tamer and adorable. Although I must admit some of the witch costumes are quite scary close up (mainly the facial masks), for kids at least. Some look a bit like 'Ghostface' from the scream franchise whilst some are more skeletal, quite macabre. The only thing that springs to mind is the fact the film is called 'Jack the Giant Killer', yet Jack only kills one giant at the start. So again like the new film there isn't actually much giant killing at all really, plenty of spell casting and witchcraft though.

For a childrens' film in the style of a fairytale, this is one SCARY picture - some of the stop-motion violence is quite harsh and the witches !.. Well, the witches are seriously macabre and the weird, cheap looking effects that surround them make them more so. I'm not sure who the director was aiming for with this but it came as quite a shock to me when I was a kid and still prompts an involuntary shiver in places.

The musical numbers aren't that great, but the Harryhausen special effects make it worth your while.

One of my favourites as a nipper, an enjoyable old school fantasy full of inventive visual effects and costumes. Torin Thatcher makes a wonderfully malevolent evil wizard.