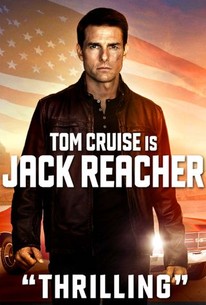 Six shots. Five dead. One heartland city thrown into a state of terror. But within hours the cops have it solved: a slam-dunk case. Except for one thing. The accused man says: You got the wrong guy. Then he says: Get Reacher for me. And sure enough, ex-military investigator Jack Reacher is coming. He knows this shooter-a trained military sniper who never should have missed a shot. Reacher is certain something is not right-and soon the slam-dunk case explodes. Now Reacher is teamed with a beautiful young defense lawyer, moving closer to the unseen enemy who is pulling the strings. Reacher knows that no two opponents are created equal. This one has come to the heartland from his own kind of hell. And Reacher knows that the only way to take him down is to match his ruthlessness and cunning-and then beat him shot for shot. -- (C) Official Site

Werner Herzog
as The Zec

Jarid Faubel
as Man on Bus

Sara Lindsey
as Woman on Bus

Tommy Lafitte
as Man With Ballcap

Christopher Stadulis
as Cop
View All

There is a dogged leanness to Reacher's pursuit that lifts his adventures from the generic rut ...

If Cruise's fantasy superhero garners as many staunch fans ... we may be witnessing the birth of a new franchise.

Jack Reacher tips constantly into self-parody and doesn't know how to signal it, like someone trying to wink at you without the benefit of eyelids.

It's high-gloss tripe with noir pretensions.

There's no room for Reacher in modern cinema's action crowd.

Jack Reacher already feels as if it belongs to another era.

Regardless of its problems, this was still a fun movie, with good dialogue and some nice supporting work. It won't change the world, but honestly, it doesn't need to.

There's fun action throughout and a solidly constructed puzzle to solve. It's not great, but it's sufficiently entertaining as it goes.

Jack Reacher is a solid, whodunit mystery that will keep you entertained.

As far as guilty pleasures go, Jack Reacher is surprisingly smarter than most.

The film has a very 70's feel to it, reminiscent of classics like Bullit or The French Connection.

Piles on action hero cliches with precision but little flair, and it goes on for way too long.

From Top Gun to Mission: Impossible, Tom Cruise is no stranger to big budget action films. Before the release of his most recent franchise starter in 2012 (Jack Reacher), fans of Cruise became very excited to see him take on yet another big budget action film. That being said, this film was far more mixed that one would have hoped, according to reviews and general audience reactions. Personally, I love Tom Cruise and I look forward to every time he is on screen. Whether it be for a great film like Edge of Tomorrow or a failed attempt in Knight and Day, his charisma has always brought me into the theatre. Upon its initial release, Jack Reacher did not do much for me overall, and even though I feel about the same, I have a few more thoughts on this film than I initially did as well. In light of its sequel coming soon, lets revisit this action film that really doesn't need a continuation. Beginning on a very engaging opening sequence, setting up a puzzle for Jack and the police to figure out, Jack Reacher starts off very strong, before becoming a little too convoluted in its own premise. Introducing many side characters and setting up twists that may or may not come to fruition, this film plays with its audience. Rather than letting the audience figure out certain clues on their own, I feel as though this film spirals fairly quickly into a generic thriller that treats its audience as if they are not as smart as the writers. This film is already a very slow-paced one, so the fact that it has to dumb itself down in the third act really takes away from the great aspects. That being said, the very few action pieces presented here, are definitely top-notch. While many people may have gone into this film expecting something overblown, the end result is actually much classier. Each action scene is placed very far apart from one another, making statements as the film progresses. There is not a single exciting moment that does not help the film along. There are very few blockbusters that come out nowadays that don't rely on spectacle for the sake of spectacle in order to get people into the theatre. For that reason alone, Jack Reacher felt like a breath of fresh air; However, even though this film takes much more care with its action and pacing than anyone could have hoped for, it does rely on the star-power of Tom Cruise to keep the audience engaged. This is definitely a Tom Cruise film, but it also wouldn't have been as enjoyable without him. Director Christopher McQuarrie helms this film with ease, as every single frame seems to have a purpose. Thanks to an incredible cinematographer and editor, this film has some very tense pacing, along with some very unique camera movements. Adding all of these elements up, you'd think that an action/thriller starring Tom Cruise would be a sure hit. While all of these aspects truly are superb, this film takes no chances in doing anything special with its characters or story and the ending of this film could not have been any more generic to set-up a franchise if it happens to make money. It may seem like I am being overly harsh on this film for being incredibly generic in its third act, it is without question that with all of the talent involved in front of and behind the camera, Jack Reacher should have been a revelation. Instead, it is just a moderately entertaining action/thriller that has just enough action and character development to keep the most average of moviegoers engaged. There are some people who love this film, some people who hate this film, and others that fall right in the middle. I am the latter part of that statement. I do not mind this film, in fact, I quite enjoy it, but its potential annoys me throughout its entire duration. Overall, Jack Reacher is fine, but the whole film displays missed opportunities in my opinion.

This thrilling crime movie is gripping and well written, even with some blatant clichés along the way. And the best about it is, of course, Tom Cruise, who offers a magnetic performance in a great narrative full of awesome twists and exciting hand fights.

This action thriller may not reinvent the wheel but it delivers exciting and engaging entertainment for two hours, even adds some surprising pinches of humor. Cruise remains one of the most convincing leading men in the business, filling the role of the smart tough guy with obvious joy. Particularly bizarre and terrifying is Werner Herzog's mastermind villain. Much more rewarding than expected! Genre fans can do no wrong here.