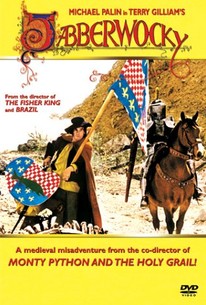 Terry Gilliam directed this fantasy/comedy taking place in medieval times. Michael Palin stars as Dennis Cooper, a dull-witted bumpkin who stumbles his way through jousting knights, grungy peasants, cross-dressing nuns, and damsels in distress to become a hero. As a hero, he is commissioned to slay an imposing dragon that guards King Bruno the Questionable's (Max Wall) kingdom. The rambunctious monster, the Jabberwocky, runs roughshod over King Bruno's domain. The King has called together all of his knights to the walled city and compels them to duel to the death, with the winner battling the Jabberwocky and winning the hand of King Bruno's daughter. But after the bloody killing of his knights, the King decides on a game of hide and seek instead. This game Dennis wins and he goes one-on-one against the terrible beast.

Deborah Fallender
as The Princess

Rodney Bewes
as Other Squire

Terry Gilliam
as Man with Rock

Glenn Williams
as Guard at Gate #2

Bryan Pringle
as Guard at Gate #1

Tony Sympson
as Peasant #3
View All

The movie strains too hard, is far too long, and its irreverent formlessness, a virtue in previous Monty Python endeavors, here seems simply dull and tasteless.

not a particularly good film, even though it is an often clever and exceedingly efficient in its absurdist experimentation mixing fantasy and comedy and romance.

Nothing builds into full-blooded absurdity, and the enormous cast of British comic specialists is given little opportunity to help out (though they were presumably recruited just for that purpose).

Jabberwocky will certainly be of interest to both Gilliam and [Monty] Python fans; we just can't see it ever becoming a favorite of either.

The cast looks like it was recruited from a Pasolini movie, the budget-concious framing is claustrophobic, and there's way too much smoke

One of the Python's weakest.

Infuse the "dark ages adventure" with some mildly amusing Python-style comedy bits and you have a strong sense of what Jabberwocky is all about.

A film purely based around the unusual poem by Lewis Carroll which in turn is set within the 'Alice in Wonderland' story. So a sweet classic source is corrupted and transformed into a dank musty set olde England, a time in the middle of the Dark Ages. 'Twas brillig, and the slithy toves did gyre and gimble in the wabe. All mimsy were the borogoves, and the mome raths outgrabe.' A stunning British cast of all stars and a style so obviously Gilliam mixed with classic Monty Python, all very familiar and reassuring when you watch. You know just what you're gonna get and you know its gonna be damn dark, grim, dirty, gross, unique and very creative. Gilliam is so good at creating Medieval/Dark Ages visuals with his sets, costumes, use of light, use of locations and wild imagination, plus without huge amounts of money. Yes it does look very much like 'Time Bandits' and 'The Holy Grail' which does seem a little similar/repetitive, but there are some many nice touches with that bleak eerie atmospheric look that you just can't help but enjoy it. The characters do feel slightly cliched and again a bit too Python-esque but they are all fleshed out so well by the classic cast, helped along with brilliantly cheap yet effective costumes, props and sets. The story is your basic Prince Charming or 'knight slaying monster' type fable, with some wickedly devilish twists. I love how the Princess (Griselda Fishfinger) in this is a fat ugly female who doesn't like Palin's character at all...until he becomes the famous monster slayer and then she wants his ass. The fact that Dennis Cooper's (Palin's character) father hates him for being a wuss and the way Mr Fishfinger treats him like crap, until he becomes famous. The character names are brilliant aren't they...Mr Fishfinger, Griselda Fishfinger. There are other clever distorted fairytale elements here too, the way wealthy town merchants don't wish to help the King fight the Jabberwocky because it brings them much revenue. The local Bishop is happy to let the terror continue as it brings in lots of donations for the church and a local skilled tradesman can't find work so he cuts off his foot to become a beggar. This proves so successful he cuts off his other foot also. The film does feel a tad dull and strung out through the middle, perks up towards the finale obviously as we wait with baited breath to see the monster. Its all about the monster really isn't it, the quirky bits in between are fun if typically overused Gilliam type stuff but really you just wanna see how this creature will appear. Some glorious gooey moments throughout are the highlight for me with some really nice makeup/effects using good old fashioned methods. The mauling and eating to death of a lonely pleasant in the woods at the start is fantastic stuff! very simply done but so effective and really gory. Love how Gilliam doesn't shy away from showing the gory remains. The Jabberwocky in the end is also nicely done, kinda like a large Muppet, the old man in a suit routine. Nicely designed but I'm sure will look hokey to some now. The film is pretty dated now but its amazing how well it stands up today. Everything really does still look good and quite authentic in that typical Python-esque way. I adore the dark gallows humour in this film, I'm sure all Python fans will do so too, its a style that isn't really seen anymore...at least not in comedies. Its all so very Monty Python, I realise I say this a lot but it is! Gilliam never liked how his work is always compared to Python, sorry Terry. But kudos for creating a perfect gnarly misshapen fairytale of grimness n gloom.

A goofy spoof of fantasy movies, from Gilliam of Monty Python, but this movie is horrible next to Holy Grail. It's got some funny jokes, but overall, it's just okay.

It does hold that Gilliam style and is funny at times, but like all of his work, it's uneven. I enjoy having it on in the background to occupy my time, but not into it enough to call it a masterpiece.

Uneven, but atmospheric and funny portrait of the dark ages.