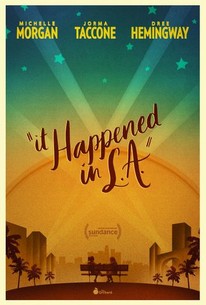 It Happened in L.A. Videos

It Happened in L.A. Photos

Annette (Michelle Morgan) and Elliot (Jorma Taccone) are a mostly happy, moderately neurotic L.A. couple. Maybe Annette doesn't enjoy game nights or taco stands as much as Elliot does, but no relationship is perfect, right? Rather than embracing their differences, Annette can only compare their relationship to their happy couple friends. This cannot be endorsed by Annette's beautiful but romantically troubled best friend, Baker (Dree Hemingway), who is very well-versed on the bleakness of the L.A. dating scene. Taking its cues from classic mid-20th Century comedies with a stylish and contemporary spin, IT HAPPENED IN L.A. is an irreverent tale of life and the search for elusive love in the 21st Century.

Jesse McClung
as Felix
View All

News & Interviews for It Happened in L.A.

View All It Happened in L.A. News

Critic Reviews for It Happened in L.A.

Michelle Morgan's It Happened in L.A. is an ensemble comedy aspiring to wordy Woody Allen sophistication but lacking serious political or satirical bite. And yet, glimmers of promise abound.

Once it sheds the immediate air of imitation, L.A. Times vastly improves and even becomes charming.

L.A. Times is a writer's showcase, but more as a display of potential than a finished product.

Reasonably well constructed as far as it goes, but there's nothing new here and the conceit of Hollywood scenesters as being uniformly vapid and creatively void is frankly rather tired at this point.

Morgan writes dialogue at a pace to rival "Gilmore Girls," with a haughty vocabulary that evokes the best of Whit Stillman and laugh-out-loud zingers so frequent I couldn't scribble them down fast enough.

The relationship view Morgan appears to be working toward - nobody's perfect, so appreciate what you have - winds up a little pat for the self-inflicted wounds her characters keep trying to emotionally bandage.

Consistently taking chances on pleasingly oddball ideas to accompany finely crafted one-liners, the filmmaker assuredly balances tone and multiple storylines, showing the confidence that her onscreen alter ego is in search of.

In the wrong hands, this could have been a very dry repetition of situations seen onscreen before, but Morgan deftly and gently introduces sympathetic characters we become attached to despite their flaws.

The film is a wonderful observation of the fabricated nature of outward happiness...Morgan's script is fast-paced and witty in the way of 20th century comedies.

The cliches then get replaced by welcome, well-observed and imaginatively specific takes on the weird entanglements our local not-quite-young adults can get themselves into.

Sadly, a few quality gags can't save the film from its flat direction, dull characters and eye-rolling morals about life and love.

Stephen Danay
Under the Radar

A sharp, witty Los Angeles satire full of quotable gold, 'It Happened in L.A. delightfully portrays its writer-director's love-hate relationship with the City of Angels.

There are no featured reviews for It Happened in L.A. at this time.

It Happened in L.A. Quotes