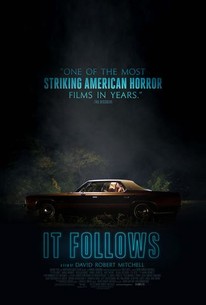 Critics Consensus: Smart, original, and above all terrifying, It Follows is the rare modern horror film that works on multiple levels -- and leaves a lingering sting.

Critics Consensus: Smart, original, and above all terrifying, It Follows is the rare modern horror film that works on multiple levels -- and leaves a lingering sting.

Critic Consensus: Smart, original, and above all terrifying, It Follows is the rare modern horror film that works on multiple levels -- and leaves a lingering sting.

After a strange sexual encounter, a teenager finds herself haunted by nightmarish visions and the inescapable sense that something is after her. (C) Radius-TWC

News & Interviews for It Follows

View All It Follows News

Critic Reviews for It Follows

It Follows represents a compelling evolution in how studios and audiences can (and should) conceive of its monsters.

No question that the storytelling here is impressive; the story itself, however, is a bit thin.

It's a testament to how scary a movie It Follows is that for days after watching it, you walk around thinking up survival plans - should you hide, stay on the move forever, pass the haunting on to someone else?

Ultimately, rather than sex, what seems threatening here is impending adulthood in all its dimensions, and in its floaty, insubstantial way, It Follows catches some of the mingled excitement and terror of growing up.

It's a wildly fun conceit ... Mitchell's atmospheric rendering of It Follows gives the film a fanciful, otherworldly feel.

Good horror films rely on suspense and tension, and this one has both elements aplenty.

I could go on at great length about the dark subtexts swirling underneath It Follows, but the most important thing is that the surface is genuinely terrifying. It's an instant classic.

So many people are being moved to think and feel things that this movie doesn't actually provide, which is usually a good thing. It just didn't happen for me.

A persistent film that creeps up on you.

It Follows is a frightening, original and involving horror movie that totally lives up to the hype.

Rather than anything as uninspired as a sex scare movie, It Follows plays more upon the fears and insecurities that plague any teenager, sexually active or not.

Whoever It Follows slept with to get the indie horror buzz that's surrounding it, here's hoping their baby-making parts are now the target of demons. It's not good, and you shouldn't see it.

Audience Reviews for It Follows

Maybe I'm not refined enough to understand and enjoy this movie as there is only one word I can muster to describe what I just watched and that is .....Boring

It is a pleasure to see a terrifying horror movie that invests in a nightmarish atmosphere of tension with moments of suspenseful anticipation, an excellent electronic score and an efficient camerawork that makes the best use of zooms and pan shots.

Horror, or fear perhaps, distilled. It doesn't take much. Take many of the known ideas about the genre and cut away the fat, that's all. Less equals more. "What in God's name does it want?" That's a question for later, buddy. Good stuff.

Too often with contemporary horror films we are subjected to a barrage of positive claims. Claims that the most recent one is the best for decades. It almost seems like audiences and critics are desperate for it to actually be the case, such is the lack of any true quality in a failing genre and the desperate demand to be spooked again. Sooner or later, though, one had to arrive where the positivity surrounding it would be genuine. Finally, we have It Follows: a film that can confidently stake it's claim to being that coveted frightener. After a sexual encounter, 19-year-old Jay (Maika Monroe) is told that she will then be followed by a presence - someone or something - determined to kill her. The only way it'll stop is if she has another sexual encounter where she can pass it on. Initially, she's doubtful but soon enough the disturbing visions begin... If you're ever in any doubt that you're being stalked by a malevolent force of some kind, then it's probably best to steer clear of the old rumpy-pumpy. Going by the usual horror tropes, when someone butters the muffin it inevitably leads to their demise. And by that, director David Robert Mitchell cleverly bases his entire horror concept around that promiscuous premise. What works in It Follows' favour is it's homage to films of old - namely, John Carpenter's Halloween. If you consider Carpenter's depiction of Michael Myers, you'll notice that he works slowly and never in a rush to fulfil his murderous intent. That's very much like the entity in this; there's a self-assurance in it's unrelenting pursuit. The setting also takes place in a similar leafy suburban neighbourhood and our protagonist goes by the name of Jay (short for Jamie) - a direct tribute to Halloween's afflicted heroine, Jamie Lee Curtis. Even Rich Vreeland's scaled down music is very reminiscent of Carpenter's classic synthesised score. You could actually spend some time identifying the previous horrors that Mitchell riffs on but that would detract from his own work and his ability to put his own stamp on the proceedings. His decision to shoot with a sombre mood and deliberate pace adds to the overall foreboding atmosphere and allows us to effortlessly enter into any given moment. This works the same in identifying with the characters. Their plight and struggle is all the more involving because it feels like we are getting a glimpse into their lives. It also helps that the cast is headed by reliable, and relatively unknown, faces and as the characters are in their teens, the film works as both an urban-legend horror and a dark coming-of-age tale. Their progression to adulthood and their promiscuity also sets up a clever sub-text that courses through the film in terms of sexually transmitted diseases: a reminiscent 80's setting suggesting the AIDS epidemic, in particular, and channels the deadly nature of that disease as it's psychological device. Mitchell's real trump card, however, comes from his use of space and setting up his shots. The background plays a major part in the film as you never know at which moment "It" might make an appearance, leaving you to regularly scan the whole frame for any movement. There's an undoubted ambiguity to Mitchell's film and while some may balk at this I, personally, welcomed it as it added another thought provoking layer. It works on many levels. If you're so inclined, you can adopt a metaphorical approach to the proceedings and delve into it's deeper meanings. But then again, sometimes a cigar is just a cigar, right? If your not the type of viewer that wishes to explore the metaphors and just want to be entertained then the film can still be enjoyed at face value and works as a chilling and effective horror yarn, nonetheless. With or without mastication. In only his second film (the first being The Myth of the American Sleepover in 2010) there's no denying David Robert Mitchell's commanding handling of events and his ability to stage a real sense of uneasiness. It's an impressive sophomore effort that has given the horror genre a much needed shot in the arm by delivering substantial terrors and retaining a sincerity in its delivery. Mark Walker