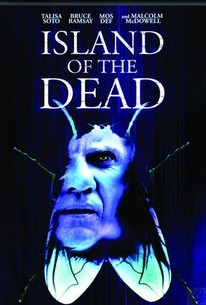 Island of the Dead Photos

A man who fails to respect the dead pays a high price for his arrogance in this horrifying thriller. For decades, the city of New York has buried the bodies of the unknown and the destitute on Hart Island, a tiny slip of land near the Big Apple's harbor, with inmates from a nearby prison on hand to do the labor. Now, multi-millionaire land developer Mr. King (Malcolm McDowell) has decided to buy the island and build a resort. King scoffs when he's told it's bad luck to disturb the resting place of the dead, but he soon learns there's a kernel of truth in their warnings -- Hart Island is also home to huge swarms of disease-carrying flies, and when King, his associates, and a crew of prisoners are trapped on the island, there's no telling if they'll make it out alive as the insects try to claim the humans as their prey. Island of the Dead also stars Bruce Ramsay, Talisa Soto, and hip-hop artist Mos Def.

Critic Reviews for Island of the Dead

If it wasn't for Malcolm McDowell slumming in this B film, it would have been a lot worse than just a bad film.

Audience Reviews for Island of the Dead

There are no featured audience reviews yet. Click the link below to see what others say about Island of the Dead!

Island of the Dead Quotes