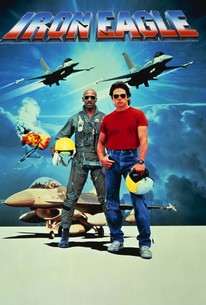 Louis Gossett Jr. stars in Sidney J. Furie's preposterous reactionary blockbuster Iron Eagle. The story concerns the 18-year-old Doug Masters (Jason Gedrick), the son of jet fighter pilot Ted Masters (Tim Thomerson). Ted's plane is shot down in the Middle East and he is sentenced to be executed by terrorists. When Doug asks the U.S. government and the Air Force for help in rescuing his father, they are unwilling to do anything. Doug goes to see one of Ted's old Air Force buddies, Chappy (Louis Gossett Jr.) and he helps the boy take an F-16 and they head to the Middle East, blowing up oil refineries and airports, insisting that Ted be released from captivity.

Larry B. Scott
as Reggie

Will Jeffries
as Smiley

... there's no apparent logic to any of this, except as a way to capitalize on the current vogue for imperialist fervor and steal the thunder from Paramount's "Top Gun,"...

This couldn't even excite me as a kid. A bad film.

Released in the same year as 'Top Gun' and virtually a fantastic unauthorised sequel! nah not really. This really is your typical 80's kiddie fare much like 'Space Camp' 'Flight of the Navigator' or 'Karate Kid'. A pop tune filled collection of montages which take you from one action sequence to another. You could almost include 'The A-Team' and 'Rocky' in here as influences also. To use another example if you will, this could almost be 'The Goonies in the Air Force'. A young teens father (who is a fighter pilot) gets trapped behind enemy lines after being shot down. He is up for a darn good hanging so its up to the plucky cocky good looking young teen to fly in there and bail his own dad outta jail. Sounds ridiculous? well it is, Louis Gossett Jr tags along and assists the young boy as he himself is a grizzled old fighter pilot. With the help of more plucky young kiddies Gossett and Gedrick plan how to fly into a fictional Arab country and nab his dad. They do this with lots of very daft tacky action plans involving the kids stealing highly delicate info, ammo supplies, maps and even two jet fighters into the bargain. The young Gedrick and his friends can do all this quite easily it seems just because they all live on the Air Force base (their folks are in the Air Force of course). As I said before they do all this with constant musical montages! When we do see some dog fights its as expected, pretty terrible looking and with some rather obvious models being blown up...badly, clearly plastic and cardboard. Kids version of 'Top Gun' and completely family friendly apart from the odd curse word hehe. Can't believe this actually made it to the cinema in the same year as that Tony Scott film, what a difference! its more of a TV movie really. Best thing here is probably the soundtrack and the rather cool poster.

An exciting teen adventure action film. I really enjoyed it. Sure it's more like a youthful fantasy than something that would happen in reality, but that's what I thought was fun about it. I loved the ending too. Others may see this as cheesy, but I say see it anyway.

Iron Eagle is a Top Gun ripoff. that would be the best way to describe the film. The film has some of the most mediocre acting that I have ever seen. Unrealistic, and laughable, Iron Eagle is pure 80's cheese. An rookie 16 year old trying to get into flight school must save his dad from an evil foreign nation. The kid is qualified to fly a Cessna, but he's able to fly an advanced 5-16 fighter. Iron Eagle is the film that says, if you can fly a Cessna, you can fly an f-16. The cast is comprised by a bunch of amateurs who probably ended up having careers in low budget B movies. Iron Eagle is a fun film with lots of entertainment, but boy is it cheesy. The best thing about the film is the hard rock and heavy metal soundtrack. Iron Eagle is not a film that strive on accuracy, so if you're looking for an accurate fighter film, then Iron Eagle is not the film for you. The definitive Fighter pilot film has yet to be made. But for what is, Iron Eagle is a silly entertaining ride, that can bring back hints of nostalgia to it's viewers. The cast is mediocre and there isn't really anything memorable about the film. Iron Eagle is a borderline decent film that hasn't aged well. There are better films out, with Top Gun being the obvious fighter classic. Like I said, the film is not memorable and the best thing about the film is the soundtrack.

A film i fordly remenber when i was a kid.Aged badly but all good fun with a great 80's soundtrack.