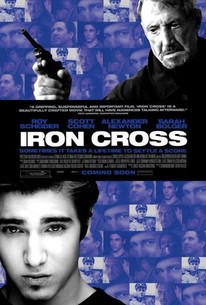 A retired New York police officer (Roy Scheider, in his final film role) travels to Nuremberg to visit his estranged son, only to find the belated reunion becoming a bitter mission of vengeance. When Joseph's son Ronnie (Scott Cohen) gave up a promising career in law enforcement to marry a pretty artist, his decision tore the family apart. Now, years after turning his back on his only son, Joseph travels to Nuremberg in hopes of reuniting with Ronnie and his family. No sooner does Joseph arrive in Germany, however, than he becomes convinced that the same SS commander who killed his family during World War II has adopted a false name and now lives in the apartment above his son. Realizing that the chances of seeing the former officer stand trial are slim to none, Joseph convinces Ronnie that his neighbor is not whom he appears to be, and together they prepare to exact bloody justice. Meanwhile, a mysterious woman named Gaby with her own secret agenda appears seemingly out of nowhere, sparking Joseph to recall his teenage romance with a heroic Polish girl named Kashka, who narrowly helped him to escape the massacre that claimed his entire family.

What he's achieved here is a beautifully crafted movie likely to have audiences talking long afterward.

Writer-director Joshua Newton's portentous revenge drama wants to say something meaningful about retribution and forgiveness but is overwhelmed by its own sense of dour significance.

There are no featured audience reviews yet. Click the link below to see what others say about Iron Cross!