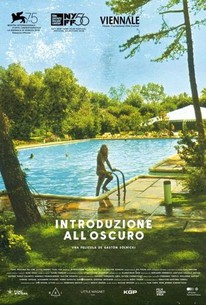 In the essay film by Argentine filmmaker Gastón Solnicki, the director travels to Austria at the invitation of the Viennale - the film festival which his late friend Hans Hurch has directed for two decades. To commemorate him, Gastón has selected a film by Ernst Lubitsch for presentation at the festival, which in his opinion best reflects its essence. Arrived in Vienna, the filmmaker dives into the majestic cityscape, which is a welcome distraction from the sad occasion of his visit. For Gastón, the city becomes an intimate evocation of the deceased friend and pulls him into its depths - with all its historical power, its cult of the dead and its dreamlike rituals.

a procession of taut, piquant compositions whose relationship to one another isn't precisely clear but which, when taken together, create an indelible impression of a highly specific milieu.

Solnicki makes a tribute through documentary essay, affectionate and personal, where each shot, justifies the somewhat egomaniacal tone that can disturb this reflection on death and pain that finally celebrate life. [Full Review in Spanish]

There are no featured reviews for Introduzione all'oscuro at this time.