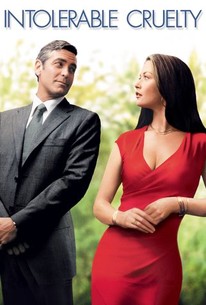 Critics Consensus: Though more mainstream than other Coen films, there are still funny oddball touches, and Clooney and Zeta-Jones sizzle like old-time movie stars.

Critics Consensus: Though more mainstream than other Coen films, there are still funny oddball touches, and Clooney and Zeta-Jones sizzle like old-time movie stars.

Critic Consensus: Though more mainstream than other Coen films, there are still funny oddball touches, and Clooney and Zeta-Jones sizzle like old-time movie stars.

Joel and Ethan Coen take on the classic battle-of-the-sexes screwball comedy with Intolerable Cruelty. George Clooney plays Miles Massey, a high-powered Los Angeles divorce lawyer nearing a midlife crisis . While representing wealthy client Rex Rexroth (Edward Herrmann), Miles meets his match in Rex's gold-digging wife, Marilyn Rexroth (Catherine Zeta-Jones). He's impressed by her similarly heartless ways of using marriage to fuel an expensive lifestyle, but he still defeats her in court. With Marilyn looking to get her revenge and Miles finding himself attracted to her, the two engage in a ruthless romantic pursuit to out-swindle each other. Billy Bob Thornton shows up in a small role as Texas oil tycoon Howard Doyle. ~ Andrea LeVasseur, Rovi

Cedric the Entertainer
as Gus Petch

Here's an anomaly: a comedy about smart people.

The Coens do an efficient job of stamping their signature grotesquerie on sumptuous Beverly Hills and Las Vegas settings and ladling on gallows humor and malice, sometimes with the verve of early Robert Zemeckis.

A date-movie with brain cells.

This time, having found in Sturges a sensibility which chimes with their own, they've got a winner.

The Coen Brothers do provide enough of a diversion with bits and pieces of wacko casting, and with the deranged details of dress and makeup of their fleeting gargoyles, to make the proceedings at least moderately amusing.

Glitz, glamour, comedy and Clooney and [ Catherine] Zeta-Jones. Undeniably the funniest and most romantically funny comedy of the year.

These stars not only light up the screen, they generate enough electricity to light up Times Square. Movies just don't get better.

A competent bit of work from which striking originality and idiosyncrasy have mostly been pruned away.

This is the Coens dabbling in the mainstream, and bending it to their will.

Screwball comedy. The words alone, so often said with admiration and esteem, the item itself so little seen, its akin to invoking "Shangri-La", and yet here is the real deal, unexpected particularly for the casting of its chief stars. Somehow I don't think of them when I consider that ethereal quality known as talent. Yet it's here, witty dialogue delivered with verve. Commentary on not just the culture of the uber-rich lifestyle that is Beverly Hills, but also on our national obsession with money in particular, that fat baby: greed ("if I don't get more right now of whatever it is I want I'm gonna cry very loudly!"). Very good work.

I was not expecting this gem; it was very funny and subtle in a way that only the Coen brothers can pull off. Its almost as entertaining as the Coens' "O Brother Where Art Thou," which also stars George Clooney. The balance between love and manipulation has never been funnier; it's a romantic black comedy if that makes any sense. Clooney as divorce attorney Miles Massey is flawless, as is Catherine Zeta-Jones as conniving goldigger Marilyn Rexroth. CZJ is as funny as she is beautiful, definitely underrated as an actress. Its got a wonderful supporting cast: Cedric the Entertainer, Edward Hermann, and especially Julia Duffy-perfectly cast. Stereotypes are skewered, and deception and hustling run rampant. God knows matrimonial attorneys deserve this treatment. If you missed this excellent film at theaters years ago, watch it now. I promise you'll love it.

Funny comedy about a divorce lawyer falling for a gold digger. Great chemistry between George and Catherine. George is brilliant at the slapstick comedy. Billy Bob Thorton is very funny.

I am giving this a recommendation, but a minor one. The movie is uneven, and the script is quite weak, but the movie, like all Coen Bros. films, is still interesting, no matter how many flaws exist within. It is a quirky take on the screwball comedies of the 1930's/40's, and there are some great moments within, along with some fine performances. The film is about a slick divorce attorney who begins to fall apart when he falls in love with a gorgeous, but scheming gold digger. Like I said, the script is weak, but I blame it on the two co-writers whose last names are not Coen. That's the troubling thing about this one: I can't really tell how much of this is the Coens, and how much isn't. It does have its moments, but overall, it doesn't really feel like a true work from Joel and Ethan. I still kind of like this however, but it is easily their weakest film, and my least favorite. Maybe it's okay though. I know that not everyone bats 1,000, but at least we know for a fact that the Coens picked themselves way up after this minor effort.