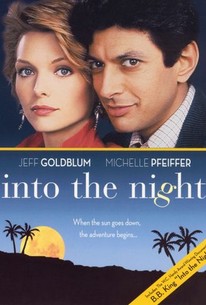 Critics Consensus: Despite its two stellar leads, Into the Night finds director John Landis indulging in far too many gimmicks in lieu of a well-rounded story.

Critics Consensus: Despite its two stellar leads, Into the Night finds director John Landis indulging in far too many gimmicks in lieu of a well-rounded story.

Critic Consensus: Despite its two stellar leads, Into the Night finds director John Landis indulging in far too many gimmicks in lieu of a well-rounded story.

Into the Night Photos

John Landis tries for a laid-back surrealism in his romantic thriller Into the Night. Jeff Goldblum plays an exhausted and unhappily married aerospace engineer named Ed Okin. He goes to LA International Airport to get some sleep in the parking garage. Instead, a scatterbrained blonde beauty, Diana (Michelle Pfeiffer) falls on his car, being chased by a bunch of sharpshooters. It seems that Diana has smuggled six Iranian jewels into the United States and a group of assassins want them back at any price. Ed and Diana take to the freeway, looking for a place to rest, but the chase never ends and the duo keep running from the pack of Iranian zanies.

Cal Worthington
as Himself

Jack Arnold
as Man with Dog

Sue Bowser
as Girl on Boat

Richard A. Baker
as Drug Dealer

William B. Kaplan
as Kalijak Grip

Jim Henson
as Man on Phone

Pete Ellis
as Himself

Zorah Ramsey
as Lady in Waiting

Critic Reviews for Into the Night

"Into the Night" features cameo appearances by 11 directors, none of whom had the sense to get behind the camera and help the 12th, John Landis.

The film itself tries sometimes too hard for laughs and at other times strains for shock.

Pfeiffer in particular takes the sort of glamorous yet preposterous part that generally defeats even the best actress and somehow contrives to make it credible every inch of the way.

Maybe what the movie needed was more professional discipline and less geniality. As a rule, it's probably better to throw the party after the filming is finished.

A little bit of Into the Night is funny, a lot of it is grotesque and all of it has the insidey manner of a movie made not for the rest of us but for moviemakers on the Bel Air circuit who watch each other's films in their own screening rooms.

Goldblum, who usually elevates any material, seems asleep at the wheel in a role where his character does virtually nothing but drive Michelle Pfeiffer around wherever she asks him to.

Because of all the cameos and in-jokes, this gimmicky weightless film should appeal to mostly film buffs.

The tone, despite the frequent bloodletting, is light, and the film works better than the script would indicate.

Landis at his most cameo-obsessed and self-indulgent.

An uninteresting and off-putting movie.

Audience Reviews for Into the Night

Odd combination of Jeff Goldblum, a depressed insomniac whose life is dull, uneventful and his wife is cheating on him, the other person being Michelle Pfeiffer who is a jewel smuggler and has some Iranians after her for some precious stones. The mismatched pair bump into each other, make friends and have to run from the nasty Iranians which leads to all manner of scrapes and tight situations none of which are particularly exciting or original. The film is really quite dull much like Goldblum's performance and doesn't offer anything other than an impressive list of cameos, why? beats me. Pfeiffer and Goldblum don't blend a tall, the action is weak, its naturally very very dated and director Landis is one of the Iranian agents in (I think) his only full movie role.

A scary Irene Pappas, a shocking hostage situation, and David Bowie's small role are the only things I enjoyed, even with all the people (Carl Perkins, Rick Baker, etc.) who did their cameos well. The dialogue isn't great and the dead air Landis allows to form around Goldbloom's lines keeps the movie from starting to live.

A great zany thriller movie with an interesting story and good actors. I really liked this movie.

Into the Night Quotes